Two new modelcars in scale 1:18 and from diecast should inspire the friends of the big Volkswagen with numerous extras 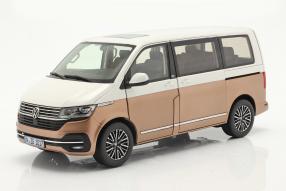 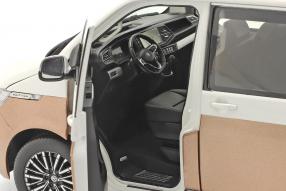 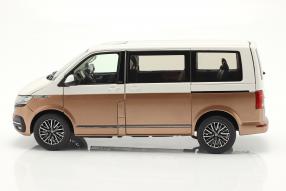 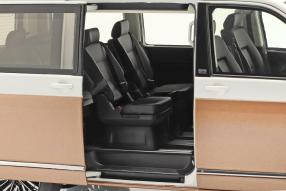 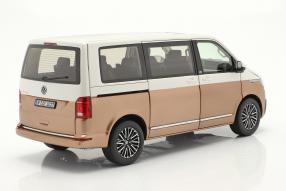 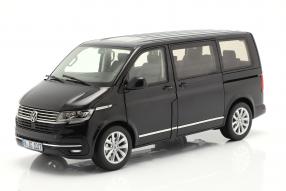 The label NZG, which is espeically known for its commercial miniatures, land real blasts with the current Multivans from Volkswagen: The newly released modelcars take the VW Multivan T6.1 as their role model, the facelift of the proven model series T6 from 2019 that belongs to the model year 2020. The models are produced from diecast and have an unbelievably wide range of equipment that goes far beyond the standard of the competitors. First the basics: Two openable sliding doors on the sides, a wide opening tailgate, a functional engine hood and of course openable doors for driver and co-driver. NZG offers the car models in scale 1:18 under the item number 10171/50 as Highline version in deep black as well as under 10171/67 in the two-tone painting candy-white with copper-bronze.

The models of the Multivan 6.1 generation six with this two-tone painting and the striking chrome details masterfully reproduced by NZG remind on the Bulli T1: Almost 70 years of freedom on four wheels - when the first Bulli rolled off the production line, nobody could have guessed that it would one day move the whole world. The Multivan 6.1 generation six brings back memories of the good old days. The exclusive paintwork and numerous details are a reminiscence of these greats in automotive history, who are accompanied by truly worthy miniatures with these modelcars. They correspond exactly to the famous and popular model in terms of look and appearance, but their qualities bloom in the dark: the front wheels are steerable and the replica of the 2.0 liter TDI engine is a real miniature work of art, as we would otherwise know it from Autoart in this quality.

In the interior, the owners of these modelcars can expect a removable multiflexboard, a meticulously reproduced dashboard with decals for the instruments and the screen, prototypically colored control elements and switches, a mavable table with foldable armrests and an equally foldable rear seat, movable seats in all three rows of seats as well as turnable seats in the second row. Mega! This is the way it has to be, when sitting at the desk with a phone and like to have the model in his fingers. In length, these 1.6 kilograms heavy miniatures measure about 26.2 centimeters. The processing is high quality; small gaps and perfectly fitting glazing up to the glass roof characterize the miniatures: Highlights, as they should not be missing in any collection with topic VW.