In time for cyber Friday, the company from Stuttgart has launched the large editions of its special series in Salzburg livery 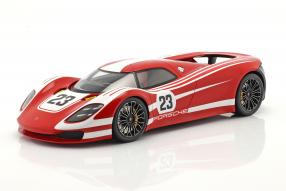 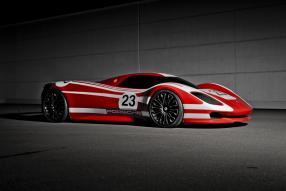 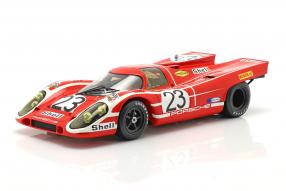 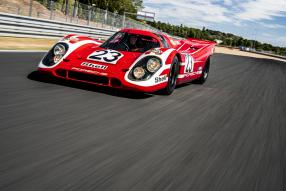 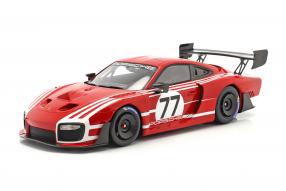 Ten days ago, the blog of ck-modelcars.de has reported about the modelcars, which had been released by Spark and Porsche for the anniversary of the Porsche 917; so to the racing car with which the team from Stuttgart celebrated its first victory at the 24 Hours of Le Mans. The Porsche Museum honored the anniversary of the vehicle, first presented in 1969, with an extensive special exhibition. From May 14th to September 15th, 2019, 14 exhibits were on view under the title “50 Years of the Porsche 917 - Colors of Speed”: including ten 917 cars with a total of 7,490 hp. While the previous article referred to the scale 1:43 miniatures, this article deals with the scale 1:18 models, which also include modelcars from the 917 Living Legend design study, which pay homage to the first Le Mans winner from 1970.

The winner car of Porsche in Le Mans wears the starting number 23: The racing drivers Hans Herrmann and Richard Attwood achieved it in 1970 to get the first of 19 overall victory by Porsche at the Sarthe in the 917 KH with the world famous red-white Salzburg design. As a Group 4 sports car, the 917 was specially designed for the 24 Hours of Le Mans and the Manufacturers' World Championship, which initiated Porsche's winning streak at Le Mans: the following year, Helmut Marko and Gijs van Lennep managed to repeat this success. In the end, 19 overall victories in Le Mans should be in the balance. More than 40 years later, the designers took up the 917 theme again - this time in the form of a design study entitled “917 Living Legend”, which the Porsche Museum presented to the public for the first time as part of the special exhibition.

The new scale 1:18 modelcars for this concept car are limited to 1,000 units and precisely trace the lines with which the study is reminiscent of the legendary winning car with the 23rd. While the front of the racing car is still smooth and clean in keeping with Porsche's formal language, the rear gives an impression of how impressive a today's 917 could look on the track; nevertheless based on the current design language of the Stuttgart-based company. The miniatures made of the high-quality polyurethane cast resin appear with the item number WAP0219340L. In the same series and a corresponding paint job, collectors can acquire the Porsche 935 based on the 911 GT2 RS Clubsport Salzburg with the starting number 77 in 1:18; limited to 935 pieces, listed under number WAP0219410M935.

Even more information about the Living Legend

The last piece of the remarkably high-quality modelcars is the Porsche 917 KH itself, the winning car from Herrmann / Attwood, with the starting number 23 and in the Salzburg design. This got its name because the car with a short tail was brought to the start by the Porsche KG Salzburg team and next to the factory vehicles. The production of the 1:18 modelcars has been limited to 917 units within this special series and is available under WAP0219400M917. The link embedded here takes you to the article about the 1:43 models, which goes into more detail with pictures and videos on this special series and its role models.

Here: Click to all modelcars of this series in the shop