With the miniatures from the collection USA exclusive, GT Spirit enriches the showcases with two strong off-road vehicles in scale 1:18 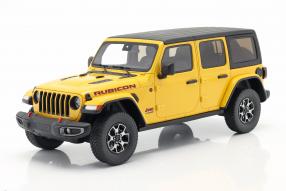 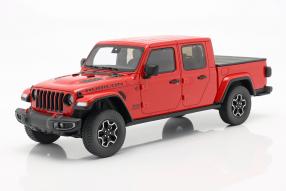 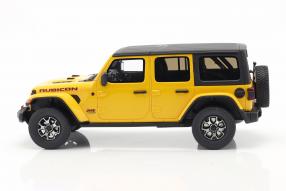 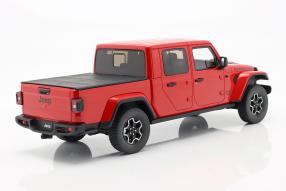 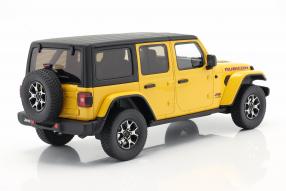 Models with the noticeable colors as red and yellow always stand out particularly well in collections: GT Spiritmodels delivered two proper eye-catchers, which in this case really attract the eyes of the fans: The Jeep Wrangler Rubicon in the color hellayella, so yellow, the Jeep Gladiator Rubicon in firecracker red. The miniatures replicate two representers of the generation JL from 2018, which were developed by FCA US LLC. The two modelcars made of the high-quality polyurethane cast resin are sold under the item numbers GTUS026 and GTUS024 and prove to be perfect copies of their great role models. GT Spirit's decision not to provide the models with openable doors enables an extremely good reproduction of the details and not just a prototypical reproduction of lines and appearance.

The brand name Jeep belongs to the Fiat Chrysler Automobiles nowadays and has its origin as the name for the off-road vehicle Willys MB. Founded in 1941, Jeep nowadays develops Sport Utility Vehicles, which have long since left the past of the simple CJ all-wheel-drive vehicle built from 1944 to 1986 and originally developed for the military. Replaced by the Wrangler, the latest version with the production code JL has been available as its fourth generation in various body versions since 2018: It is available as a three-door or extended five-door with different roof variants, with hard top or soft top. The long version is called Unlimited. Vehicles that are baptized with the Rubicon name are equipped with reinforced axles and better off-road gear reduction that are optimized for off-road use.

The engine range includes in Europe a 2.0 liter petrol with four cylinders, 199 kW / 270 hp and 400 Newton meters (Nm) of maximum torque as well as a 2.2 liter big turbo-diesel with 147 kW / 200hp and 450 Nm, with four pots, too; each shifted via a eight-speed automatic transmission. In the Jeep Wrangler Unlimited, both engines offer a trailer load of up to 2,495 kilograms including standard trailer stabilization. The fans of the modelcars with no functional parts see nothing of this technology, but the door hinges, grill, the replicas of headlights and interior compensate for this with a sharpness in the representation that collectors only know from GT Spirit models or Otto mobiles. Two modelcars, yes, but in a class that they stand for: First-class work in both cases.

Here: Click to the modelcars of the Jeep by GT Spiritmodels