There are people who differ car types in 2 areas. We&#039;ll investigate and foundwith the GT-R Type R35 a classic response. 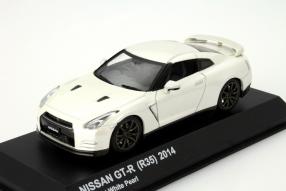 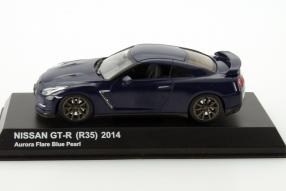 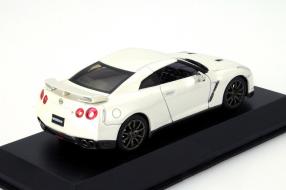 A few decades ago, the gender distribution in the automotive sector was clearly defined: An Audi 50 was a woman's car, the Porsche 911 is more for the lords of creation. Today the situation is - fortunately, in our view - quite different: more and more women are to be seen behind the wheel of a Porsche Cayenne or a Mercedes-Benz SL. Is there a real men's car at all, which is hardly ever seen in the hand of a woman? Yes, we think we havefound such a car. Extremely sharp, extremely strong and extremely masculine in appearance: The model car maker Kyosho remides us of these  old roles with the  Nissen GT-R Type R35in scale 1:43 published in two colors. This is because a model and thus model are really angry, martial opened and reinforced with massive spoilers.

Past times braught to life

The car model comes in the colors Brilliant pearl white under item no 03744BW and in rare Aurora Flare Blue Pearl (03744ABL) at a price of 42.95 in handle. It immediately brings to mind earlier times long since faded spoiler culture on the road, because the massive apron, the flared wings and the monstrous rear wing embody times that have no more impact on the designers in sports car. But precisely what makes the Nissan so attractive, because it is purely visual a car to have. This also conveys the model car. Sharp edges, a continuous in-depth three-dimensional grille, framed with chrome frame air outlet openings on the flared front fenders and a no less impressive rear skirt in 1:43 beams withs Power

Kyosho has delegated the feel of the design of the model perfectly in the world's most widely used size in the range of car models. The detailing of the honeycomb grille on the front fascinates our critical collector's eyes as well as the drafting of the rear apron. Together with the wider fenders which components generate the powerful tension that emanates from the Nissan GT-R R35. Of course, Kyosho has looked at every detail precisely in the interior and transfer any coloration in the model prototype exactly to the model.
The model car diecast zinc doors and hoods remain closed as usual in this segment. So the fan has unfortunately nothing from the power set, the 404 kW / 549 hp from its larger example. The bi-turbo V6 would certainly be an eye-catcher in 1:43 scale. Nevertheless, we have to bring in the showcases of collectors the impression that the model still has the power to take off quickly and fire up the showcase. A man's car just a typical, even when - in the finish and overall impression absolutely successful - model.