With two completely new designed packagings in Gulf-look, the US-Americans deliver the winner of the hearts from Le Mans 1966 in scale 1:18 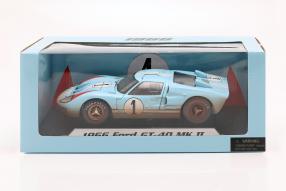 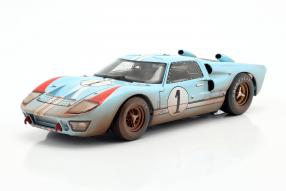 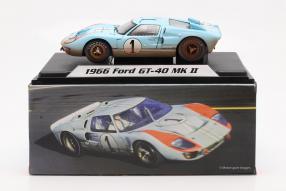 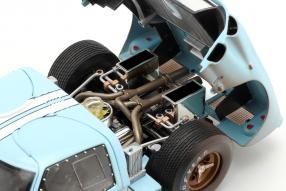 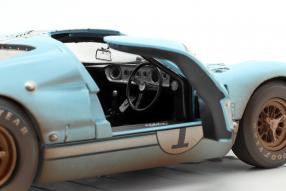 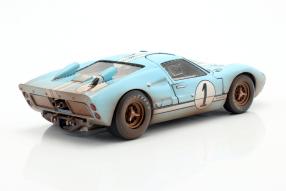 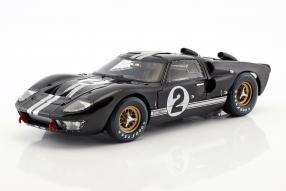 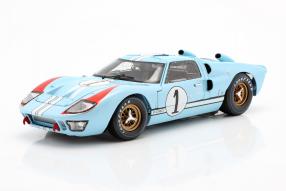 They belong to the most popular modelcars of the last years: The Ford GT40, with which the US-American car manufacturer won the 24 Hours of Le Mans in 1966. The winner of the hearts - the No. 2 by Ken Miles and Dennis Hulme - is now available in a scale of 1:18 and in a familiar shape, but with packaging that will delight fans: In the blue of the sponsor Gulf, the color corresponds to the model. This is a real blast, which rekindles the desire to watch the feature film from 2019, especially after the 88th edition of the race on the Sarthe last weekend: In “Le Mans - Against Every Chance”, director James Mangold tells the story of how Ford managed to beat Ferrari at Le Mans in 1966. Ken Miles with starting number 2 - played by Christian Bale in the film - is now available in two models.

Under the item number Shelby405, Shelby Collectibles delivers the GT40 Mk. II in the so-called dirty version, i.e. with a replica of the dirt from the racetrack. But the mixture of dust and rubber abrasion and, somewhere, moisture from Le Mans, that's not ordinary dirt, but rather ennobled accessories, right? The modelcars are richly decorated with it and, as usual, have openable doors and hoods with a wealth of fantastic details; especially in the engine compartment. Of course, this also applies to the clean version with the item number Shelby411, which actually parks in the new boxes with a more glamorous look. A matter of taste which miniature the collector prefers. The friends of the winner at the time with starting number 2, the black GT40 from Bruce McLaren and Chris, can purchase these model cars under item number Shelby408.

At the end of the well-driven race, racing driver Ken Miles looked like a sure winner right up to the finish line, but then it wasn't - the dramatic climax of the race as well as of the movie and has already been mentioned several times in this blog. McLaren and Amon were ranked first; their car started about 36.6 meters behind the car with the number 1: The extra distance made Ken Miles one of the most unlucky second in Le Mans. The starting point is very big cinema: Henry Ford II - played by actor Travy Letts - has taken over the family business of his grandfather and wants to establish American cars in the market dominated by European manufacturers. After the idea of the young visionary Lee Iacocca (Jon Bernthal) and the failed sale of Ferrari to Ford, Iacocca brought the former Le Mans winner and engineer Carroll Shelby (Matt Damon) on board.

Great drama by Le Mans on the canvas

They are working on the revolutionary racing car with British racing driver Ken Miles, but the collaboration between the stubborn heads turns out to be more complicated than initially thought. But everyone is pursuing the same goal: Ken Miles should be the first to cross the finish line at Le Mans in 1966 in the Ford GT40. Unfortunately, it is also just over: The Shelby-American Inc. team took the first two places; the third GT40 was used by Holman & Moody. The potential of the 7.0 liter V8 had shown itself in the way Henry Ford II had wished it to be. The feature film that is well worth seeing and this one from diecast miniatures - something that is sure to give a lot of joy on cold autumn evenings in pairs!