Autoart as well as Spark bring models to a certain Sport quattro S1 at the same time: Once in scale 1:18 and in format 1:43 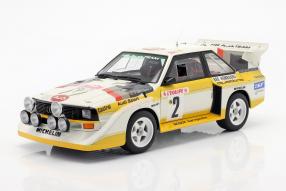 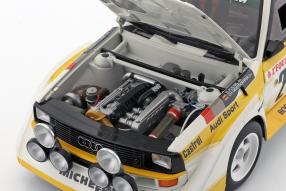 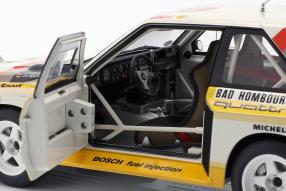 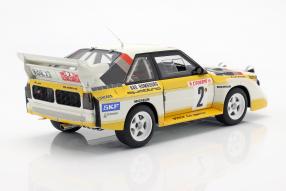 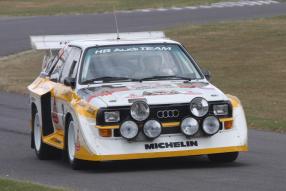 That's rather seldom: Two independently operating companies deliver modelcars based on the same role model at the same time. In two sizes, however: Audi Sport quattro fans have the opportunity to equip their showcases with a very special pair. But first about the model: The Audi Sport quattro was once the 32 centimeter shortened version of the famous coupé from Ingolstadt, which was often referred to as the original quattro. It was first presented at the IAA in Frankfurt in 1983 and developed for rallying on the basis of the Audi quattro. From autumn 1984 to summer 1985, 220 units were built that were required for the FIA homologation of group B; The Ingolstadt-based company used 20 of them for sports. With this article, the editorial team would like to bring you closer to these cream pieces of model building.

The keyword "cream piece" leads us to the highlight of course: The role model of the Audi Sport quattro with the item number 88601 by Autoart - own spelling AUTOart - is the racing car of the legend Walter Röhrl and his no less legendary co-driver Christian Geistdörfer, who achieved the 4th place at the Rally Monte Carlo in 1986 with the coupe used by Audi Sport. Before we get into this race, let's do what we love to do with Autoart miniatures: open the bonnet! The engine of the Audi Sport quattro achieved an output of 225 kW / 306 hp and achieved a maximum torque of 350 Newton meters (Nm). The five-cylinder four-valve engine received a K27 turbocharger from KKK for ventilation, which allowed a boost pressure of up to 2.04 bar. And this drive is the highlight of the model!

Dear collectors: Take a look under the bonnet! What then reveals itself to you is a small work of art worthy of admiration. The engine block, cylinder head, intake system and turbocharger, the lines, spark plug connectors, the hinges of the bonnet - we can't get enough of them! Nobody builds engines in the model as well as Autoart; apart from CMC! Of course, the scale 1:18 Audi also offers an interior that corresponds exactly to the prototype, which can be viewed through the opening doors: the dashboard cannot be replicated more precisely. Roll bars, seats, fire extinguishers - nothing is missing and everything is replicated in top quality. Not a matter of course with modelcars of this type: the trunk cover can be removed and the fans underneath are shown correctly.

A further extra: The additional head lights - they show that Autoart decided for the Night-version of the role model for the modelcars with the starting number 2 and the design of the cigarette brand HB. That also carries the huge rear spoiler, like the miniatures in scale 1:43, for whose manufacture Spark has received the license and which carry the item number S5190. Which one should you buy now? For Audi fans there is only one answer: Both! And for fans of engines in models: The Autoart one! And for fans who want to recreate the entire starting field in format 1:43: The Spark, because it looks like the large model and the prototype, but saves space in the showcases. Incidentally, the original drove as part of the 1986 FIA World Rally Championship, which started in Monte Carlo on January 18th. After 13 world championship runs, the Finn Juha Kankkunen won the title.