With tailwind to the Eifel: Off to the second round in the league of the super sports cars, in which our friends around Timo Bernhard are going to compete next weekend 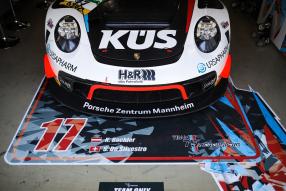 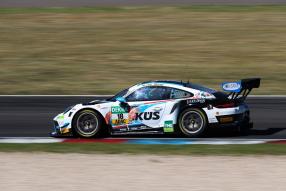 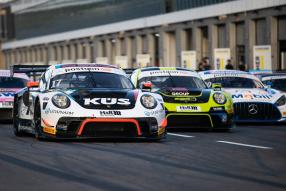 After the encouraging start to the season in the ADAC GT Masters with two point placements, leading kilometers, position one in the junior rating and a podium that was only lost because of an accident that was not our fault, the KÜS Team75 Bernhard expects good results for the second event in the "League of the Super Sports Cars" at the Nürburgring at the weekend. In the Porsche 911 GT3 R with starting number 17, Porsche works driver Simona De Silvestro from Switzerland and her team mate, Ex-Porsche Junior Klaus Bachler (29) from Austria, want to score their first championship points in the Eifel after the bad luck at the Lausitzring. In the sister car with starting number 18, David Jahn (28) from Leipzig and Jannes Fittje (21) from Langenhain are aiming for the points again at the Nürburgring after their good performance in Lausitz.

The Saturday race starts at 1:05 pm; the also one hour race on Sunday at 1:10 pm. Both races can be watched live on Sport1 (German TV channel). On the weekend, Jannes Fittje also defends the lead in the junior ranking, which he achieved with a victory and a third place at the Lausitzring. Team boss Timo Bernhard: "I always like to travel to the Nürburgring, the track has always been good to me and to my team. Basically, we've seen a lot of positive things at the Lausitzring. Unfortunately, especially with our starting number 17, the results did not reflect the performance of the drivers and the team. That is what we want to change at the Nürburgring. With our starting number 18, we want to remain as stable as we were at the Lausitzring. We also looking forward to the start of the ADAC GT4 Germany, where we are also going to compete!"

And in this class, the Team75 Bernhard wants to set the focus on the driver training: The ADAC GT4 Germany starts into the new season in the Eifel. The team from Landstuhl competes in this series with a Porsche 718 Cayman GT4 Clubsport. Both, also live broadcasted on Sport1, start on Saturday 2:40 pm and on Sunday at 2:45 pm. It is driven on the 3.629 kilometer long Grand-Prix track of the Nürburgring. A hygiene concept, developed by the organizer of the racing weekend, was approved on Wednesday by the district administration Ahrweiler. A total of 5,000 visitors can watch the races at the Nürburgring on three opened grandstands: The BMW M Power grandstand (T3), the Bilstein grandstand (T4) and the Mercedes grandstand (T4a) along the start and finish straight are going to be occupied to 30%.