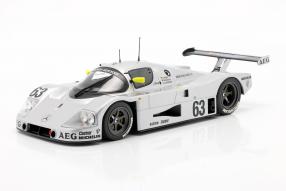 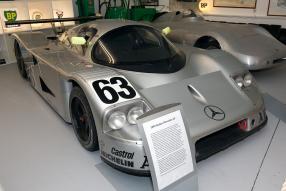 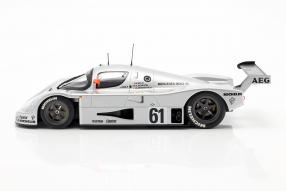 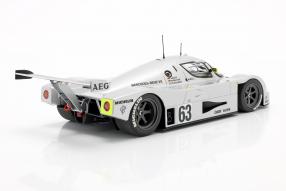 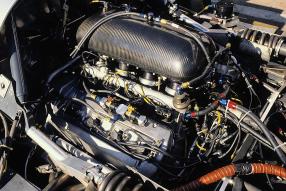 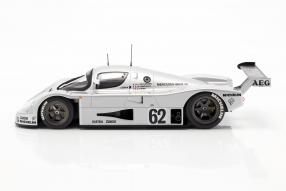 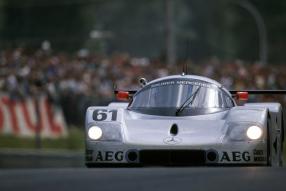 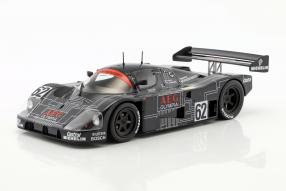 How long has it been? 31 years? With the miniatures of the Sauber C9 from 1989, the editors of this blog become aware of how much time is moving on. Because it doesn't feel like it has been three decades since the Mercedes-Benz with the starting numbers 61, 62 and 63 started at the 24 Hours of Le Mans. Minichamps has taken up this topic again and delivered three 1:18 modelcars last week, which among other things includes the winner of the 57th edition of this endurance race. Jochen Mass, Manuel Reuter and Stanley Dickens were at the wheel of the victorious Sauber C9 with starting number 63. Minichamps reduced this vehicle under item number 155893563 and also brought out the other two silver arrows, which play an important role in the history of Mercedes-Benz.

With the role models of our modelcars, history was certainly written: The Sauber-Mercedes C9 represents the return of Mercedes-Benz to top-class sport. Peter Sauber, founder and team leader, has a lot to tell about this over many years. His first cars - from the C1 to the C5 - were built on his own, without factory support from any side; starting from the basement in the parents' house of Peter Sauber, who was supposed to make career as a team manager in Formula 1. And then the cooperation with Mercedes-Benz followed step by step: “Yes, it started in 1984 and was very delicate at the beginning because motorsport was a taboo subject at Mercedes at the time. This attitude was due to the serious accident at Le Mans in 1955. A sworn group of Mercedes engineers supported us in their free time until we officially became a Mercedes-Benz works team in 1988.”

Professor Werner Niefer from Mercedes-Benz played a special role in this, so the 76 year old Swiss Peter Sauber today: "The former chairman was an old school entrepreneur, as one could barely find in large companies today. At that time, I had no contract with Mercedes, but a handshake deal with professor Niefer, which was worth more than any multiple signed document. The Sauber-Mercedes C9 were painted dark blue in 1989 and ready for the first racing use in Suzuka. Professor Niefer, however, wanted the cars to be painted in silver. But there were many vote against from his board colleagues who were too uncertain about the chances of success. Professor Niefer asked me to paint a modelcar in silver and take it to the Geneva Motor Show." The crucial meeting was to take place there.

That, however, was rather resinous according to Sauber's words, as the team founder put it: "Then Mr. Niefer suddenly put his arm around my shoulders, took me aside and said: 'All scaredies. Repaint!‘ What we did in a night and fog campaign. It was the rebirth of the Silver Arrows. We celebrated a double victory in Suzuka, won the world championship for drivers and teams and landed a double victory in Le Mans. We paid him back his trust.” A really nice story, which in the end can be seen as the starting point for a development that has led to today's Mercedes-AMG F1 team. The modelcars of the runner-up with Mauro Baldi, Kenny Acheson and Gianfranco Brancatelli appear in an edition of 402 pieces under item number 155893561. Let's take a closer look at the prototype!

The key data for the Sauber C9

The Sauber C9 - later called Sauber-Mercedes C9 and Mercedes-Benz C9 in 1990 - is a constructed racing car after the regulations of the Group C, with aluminum-monocoque, which was used in the Sports Car World Cup WSC from 1987 to April 1990 and at the 24 Hour Race of Le Mans. With seven victories in eight races, the team won the sports car world cup in the season 1989. In qualifying for the 24 Hour Race at Le Mans, the C9 reached a speed of 389 kilometers per hour on the Mulsanne straight, the second highest speed ever achieved there. In the race, Reuter, Mass and Dickens won with a distance of 5,265,115 kilometers in 389 laps in front of about 230,000 fans. An average of 219.990 kilometers per hour.

55 cars went to the start of the competition on the 13.535 kilometer long track, 19 were rated. The weather: cloudy but dry. The spectators experienced a gala performance by Mercedes-Benz: The third Sauber C9 with the starting number 62 was driven by Jean-Louis Schlesser, Jean-Pierre Jabouille and Alain Cudini and finished fifth. The models for this are also limited to 402 units and are available under item number 155893562: a trio that should not be missing from any collection of fans of the 24 Hours of Le Mans or Mercedes-Benz and is reasonably priced because the doors and hoods of the modelcars remain closed, since they were built from diecast zinc. So we can see no details from the drive set. The engine, used in 1989 with the internal series designation M119 was a V8 with four-valve technology and two camshafts per cylinder bank.

Its maximum torque from 810 Newton meters (Nm) could be increased up to 825 Nm, which also increased the power in the qualification up to 590 kW / 800hp at short-term. The diecast miniatures really convince with fantastic workmanship and prototypical details in term of correctly attached engravings, the true-to-original chassis components, the carefully reproduced rear wing and the perfect replica of the wheels. Appearance wise, they perfectly match those of the role models and also have the sponsor stickers that drew attention to AEG, Castrol, Bilstein as well as tire supplier Michelin. Wing mirrors, air intakes and antennas were, of course, perfectly executed as usual.

Here: Click to the modelcars of the Sauber C9