Numerous modelcars in scale 1:43 have been shipped by the Asians before this weekend, among these an unforgotten world champion 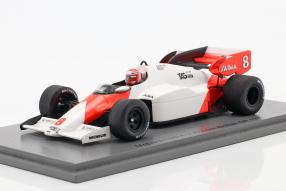 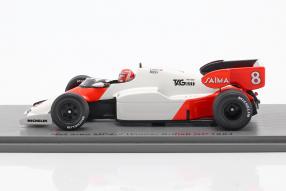 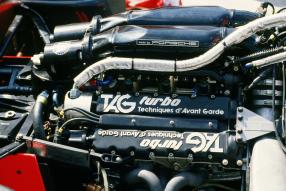 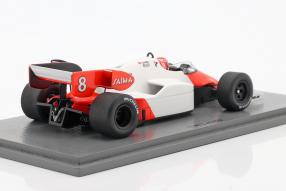 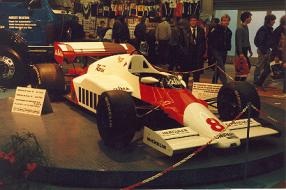 The future of the traditional racing team McLaren filled the media last thursday: In the coming season, Lando Norris and Daniel Ricciardo are going to sit in the cockpits of the racing cars froom Woking. The McLaren Racing Ltd. is after Ferrari the oldest team of the Formula 1; it was founded in 1965 by Bruce McLaren and made the driver world champion twelve times. The manufacturer's world championship was won by the company eight times. In the past week, Spark delivered modelcars after their role models of historical Formula 1 vehicles in scale 1:43, among them is the McLaren MP4/2. Niki Lauda won the third driver title for McLaren in 1984 in car with starting number 8; the team ended the year with its second engineering championship. Let's take a closer look at the modelcars of the winning vehicle from Niki Lauda with the item number S5395.

The McLaren MP4/2, developed by John Barnard, was a big step forward for the team, whose races with the previous model were not characterized by reliability. At the time, the MP4/1E 1982 was powered by a brand new turbo engine from Porsche. The 1.5-liter V6 was financed by the Luxembourg-based Techniques d’Avant Garde, whose initials TAG adorned the cylinder head cover of the drive set. Success on the racetrack only started with the McLaren MP4/2, which won twelve out of 16 races in 1984. This world championship was exciting until the end: Starting from 11th place on the grid, Lauda achieved a second place, which was given him also because of the loss of Nigel Mansell in the Lotus. The Austrian won his third driver title with just 0.5 points ahead of team-mate Alain Prost.

Spark delivered the miniatures to the team Malboro McLaren International of the British Grand Prix, where the MP4/2 had to compete without advertising of the tabacco company. The role model of the model is very nice to see in the video embedded above, which Kiris Garage put on the net. The finish of the modelcars built from the high-quality polyurethane resin is, as usual at Spark, of the very first quality. The miracle of Porsche with its initially 514 kW / 700 hp, which won the title three times in a row, unfortunately remains hidden with the miniatures. Spark convinces with the replica of the chassis and the huge rear spoiler. As huge as the footprints are, into which Norris and Ricciardo have to step for the world championship team in 2021.