With the model of the F80 GT-Spirit presents a great foundation for an exclusive model for CK-modelcars: The new M3 - almost entirely in white. 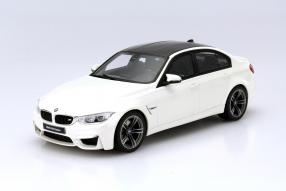 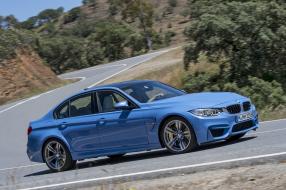 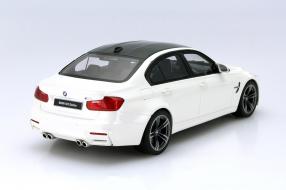 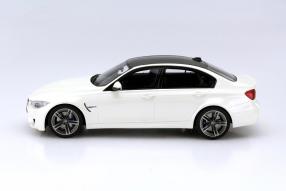 It was exciting until the last lap, but in the 18th and final race of the DTM season 2015 BMW defended its lead in the Manufacturers' Championship and won for the third time in 4 years the title. Thus, not only Mercedes-AMG and the newly crowned champion Patrick Wehrlein have something to celebrate, but also the archrival of Munich. BMW secured the 1st place with the manufacturers' standings 602 points, ahead of Audi with 595 and Mercedes-AMG with 534 counters.

For the fans of the brand with the blue and white propeller logo, GT-Spirit brings, in cooperation with CK-model cars and exclusively there, a BMW M3 in resin plastic which shines (with the exception of the roof) all in white. The special model of the F80 declined open doors and hoods, but scores with a superb build quality of all the relevant details.

Key data for the prototype

Under the hood of the four-door lies a twin-turbo inline six-cylinder with 3.0 liters of displacement. The drive provides 317 kW / 431 hp and a maximum torque of 550 Newton meters (Nm) to the crankshaft. It is shifted by manual to be actuated 6-speed manual gearbox or 7-speed dual clutch transmission. The acceleration from 0 to 100 kilometers per hour is feasible when manual switch in 4.3 seconds; the 40 kilograms heavier dual-clutch transmission makes its extra weight so well compensated that only 4.1 seconds are needed for the same sprint.

As usual for the M3, the developer payed extra care that the F80 has the lowest possible weight. So that the fenders and aluminum bonnet and roof of the latest M3 is made of carbon for installation; the latter have admirably reduced in the 1:18 scale model construction engineers.

High Quality for the Modell M3

The miniature, limited to 504 units, is an inspiration, but not only because of the reconstruction of the roof. The front with the filigree reproduced BMW kidney and especially in the interior almost perfectly recreated headlights are made to measure. The shape of the front spoiler not only corresponds exactly to the model, but is itself considered a small work of art. A sensation is also the quality of the replica of the door handles. The little things like the roof antenna and the taillights dedicated the makers of the model the same care and attention as the interior with its correct replica seats and prototypically colorized controls.

The M-gills behind the front wheels reduce the turbulence at the front wheel arches; GT-Spirit has recreated this detail as attentive as the exterior mirrors and the Gurney flap, which provides for reduced air resistance for greater downforce on the rear axle. The alloy wheels of the model form about the 19-inch double-spoke 437, invokes a charge of 2,050.00 Euro for the BMW. The price list for the M3 F80 starts at 71.000,00 Euro.