Minichamps sets accents with new modelcars to a known topic in scale 1:18 and reminds on a car that is more likely to increases its value 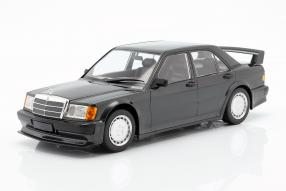 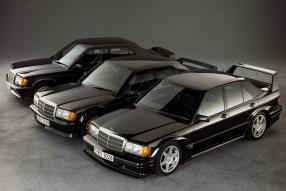 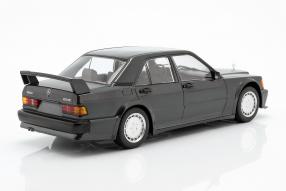 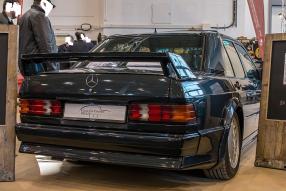 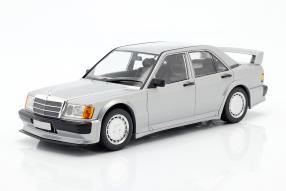 In 1989, Mercedes-Benz presented a limousine at the Geneva Motor Show, which was described as wolf in sheep's clothing: With the Mercedes-Benz 190 E 2.5-16 Evo 1 a purebred racing car opened up in the spotlight at the fair. Amongst other things, Minichamps now released modelcars to this role model in silver painting as well as in scale 1:18: Delivered to the trade under the item number 155036001, built from diecast and in an edition of 804 units. The models correspond in its design and appearance exactly to the role model intended for use in the DTM. Doors and hoods unfortuanetly remain closed, but the miniatures make up for it with a martial-looking rear spoiler that makes the modelcars an eye-catcher in every showcase. What they have in common with their racing-painted counterparts.

And thus the new Mercedes-Benz 190 E 2.5-16 Evo 1 remains as a new, manageable collecting theme: The version painted in blue black metallic, which was presented at the toy fair at the beginning of the year is limited to 1,002 units and available under 155036000. By the way, both modelcars weigh 1,110 grams. There had to be built at least 500 copies of the street version, to meet the requirements, which had to fulfill a homologation model for the racing tour cars used at the DTM. An Evo 1 is powered by an in-line-four-cylinder, which, depending on wether it was prepared for catalytic converter equipment or brought a catalytic converter from the factory, produces 150 kW / 204 hp or 143 kW / 195 hp. With Kat, the drive set of the street version developed a maximum torque of 235 Newton meters (Nm).

Only prepared it were 240 Nm. The baby-Benz in maximum version reached its top speed with 226 kilometers per hour; it accelerated to 100 in 7.7. seconds. The crisply coordinated, height-adjustable chassis and the corresponding brake system make the 190 E 2,5-16 to a real curve robber, so the trade press. The cars are few and far between on the used car market: We found two of the 502 copies, each with mileage of around 143,000 kilometers for 104,000 euros or 83,000 kilometers for 156,000 euros, each in blue-black metallic and in collector's condition. We think that these cars will experience an increase in value and wish a lot of fun with the modelcars from Minichamps. Stay healthy!