With the model series W121 Norev delivers a good miniature, that the author of this blog just wants to love, as charming as the prototype it ressembles. 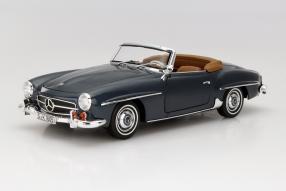 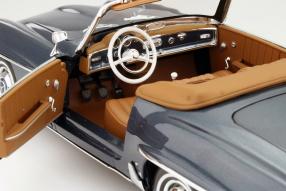 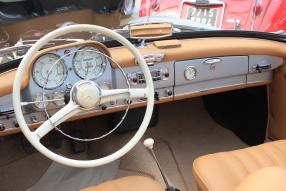 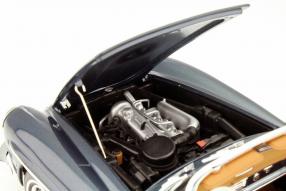 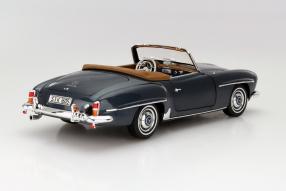 2 days ago we congratulated Mercedes-Benz to thier win of the Constructors' World Championship in F1. Constructing successful cars, that has always been a matter of a fact for the Stuttgarters. One of the most desirable cars was the 300 SL, which was made a legend as a Gullwing and produced from 1954-1957. As Roadster he found in the years 1957-1963 many lovers, but even then remained unaffordable for many people.

Much cheaper - but not one iota less attractive - the 300 SL was the visually very similar sports car with the sales designation 190 SL, the intern called the series designation W 121 II . No car from the Stuttgart-based group works today so cuddly, loveable and charming, like the 190 SL, so my view a model of the model that captures us Norev gives a scale of 1:18 and skillfully the zeitgeist of that era of the economic miracle.

Elegance in the style of the time - Chrome wherever you look

The team of Vaulx-en-Vaulin created with the 190 SL a miniature whose appearance and lines coincide exactly with the design of the prototype. The engineers have managed to give the model exactly the look and proportions with the wheels as the car will take you on the road. The little 190 SL got a, the 300 SL driven, prototypical, chromgerahmten grille with wide chrome insert and chrome bumpers, headlights and chromumfasste typical for that time bumper horns on the tail. It shines and sparkles and the frame of the windshield wipers and the wheels that carry hubcaps in body color and chrome rings. Even the prototypically designed dashboard - there is a nicer cockpit in a car in this world? - Got a lot of chrome, right down to the window cranks.

The miniature inspired by a filigree is presenting Uhrensammlung, a steering wheel with just such delicate Hupring the option of a clock in the glove compartment lid and the small white gear knob on the silver-gray lever. The upper side of the instrument panel is kept in the color of the interior; The dashboard itself in body color. Interior trim and seats were reproduced exactly in shape.

The exterior mirrors, there was at that time only on the left, the driver's side. The rear view mirror is to be found within the model in chrome on the dashboard-top. Whether he has also served as a make-up mirror? The W 121 was known among other things, by a prominent prostitute: Rosemarie Nitribitt drove one of 25,881 noble Mercedes, which have been selectively delivered with a hardtop.

Production of today even back then

We particularly like the replica of the four-cylinder engine, which has done a 77 kW / 105 hp in the model and thus was about half as strong as the engine of its big brother 300 SL. The model engine and its surroundings were reconstructed in four colors from Norev; he provides ignition wiring as well as a nice, prototypical Handrail for the front-hinged bonnet.

While also consists of diecast zinc in like the rest model, the model proved even then to be very weight conscious: While the body of the 190 SL was produced from sheet steel, the engineers put in the manufacture of engine hood, trunk lid, Türschwellen- and door skin on already the lighter aluminum. Many components, such as the slightly shortened floor assembly based on the 1953 featured 180 sedan (W 120), which costs saved.