The designed nine-eleven for private drivers in motorsport appeared in the Stuttgart range of accessories as a modelcar from Spark in scale 1:43, 1:18 as well as 1:12 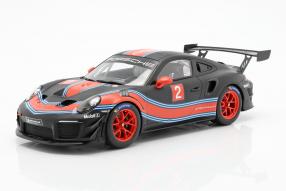 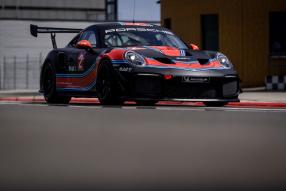 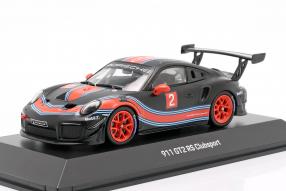 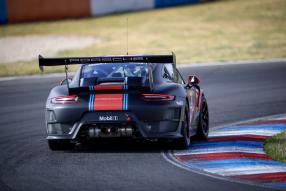 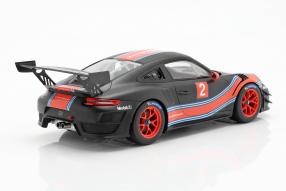 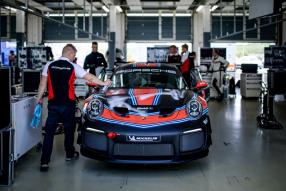 We apologize to the fans of the sports car brand Porsche for the fact that we have not presented a highlight of the extensive range of programs to the modelcars after their role models of the nine-eleven in detail so far: The current Porsche 911 GT2 RS Clubsport. The sports car manufacturer and licensee Spark are presenting models in three sizes as well as in the noble advertising packaging that is customary for Porsche of the offshoot of the street version that was presented at the Los Angeles Auto Show at the end of 2018, which has been designed for amateur racers and which is presented in the above embedded video by Mark Webber. The miniatures appear in the scales 1:12, 1:18 and 1:43 in the matt black base paint chosen by Porsche with decorative stripes in Martini-design and the starting number 2; the 1:12 edition is limited to 300 units only (WAP0231530L).

Let's stay with the larger version, which measures an incredible length of 38 centimeters. For comparison: the version in 1:18 format listed under item number WAP0211530L is around 25 centimeters long; the modelcars in 1:43, on the other hand, only about 11 centimeters (WAP0201530L). A highlight such as the 1:12 is of course a befitting presentation: the supplied showcase requires an area of 46 x 26 centimeters; It is 18 centimeters high. This shows that this legendary modelcar can also be a fantastic eye-catcher in an office or living room. The miniatures are made of the well-known high-quality polyurethane resin and exactly reproduce the appearance and lines of the sports car powered by a state-of-the-art six-cylinder boxer engine with 3.8 liters and biturbo charging.

The 515 kW / 700 hp and 750 Newton meters (Nm) maximum torque strong model with rear-wheel-drive is limited to 200 units. The Porsche 911 GT2 RS Clubsport, based on the 991 II series, made its racing debut together with its offshoot limited to 77 pieces in the design of the Moby Dick 935 at the Porsche Motorsport GT2 Supersportscar Weekend as part of the 24 Hours of Spa at the end of July, 2019. The field with 15 dedicated private drivers started on Friday and Saturday in two runs of 30 minutes each on the 7.004-kilometer Ardennes rollercoaster: The Porsche 911 GT2 RS Clubsport were all among themselves at a unique event. And just as unique are these handcrafted fantastically made modelcars, which should not be missing in the showcases of a Porsche enthusiast. Have a nice Weekend!

Here: Click to the modelcars of the 911 GT2 RS Clubsport