In a closed version, in scale 1:18 and in six colors, whose number is very limited, the Italians celebrate a great sports car 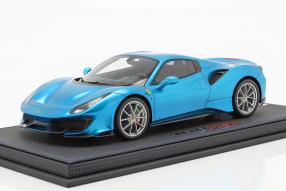 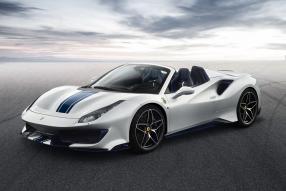 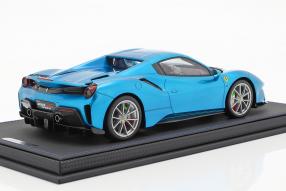 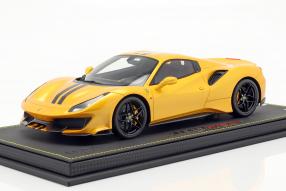 The Ferrari 488 Pista Spider experienced its world premiere at the Pebble Beach Concours d'Elegance 2018 and gave its European debut at the Paris Motor Show. The 50th topless model of the brand shines with a unparalleled relationship between weight and performance of 1,92 kilograms per hp, so Ferrari. This makes it the strongest series-spider in the history of the manufacturer. BBRmodels or shortly BBR has presented six excellent modelcars to this role model, which appeared in scale 1:18 and come of high quality polyurethan resin to the collector. The miniatures with an extraordinarily high-quality surface wear lively colors that live up to the summer lifestyle in Italy. However: The models are with their edition of only 24 to 32 pieces really rare collectibles.

Therefore, we recommend the fans to access quickly: The Ferrari 488 Pista Spider by BBR is available in the colors tristrato yellow under the item number P18163H 32 times and in the bright and noble emperor blue (P18163G) 28-times. Limited to 24 units are the editions of the model in the colors fuji-white (P18163B), Nürburgring silver with stripes in the French flag (P18163D), the incredibly strong chameleon blue-purple with the stripes of the Italian flag (P18163E) and the homage to the founder of Ferrari, the enzo green metallic / yellow (P18163). In addition to the craftsmanship outstanding quality of processing, we must emphasize that the detailing in the front apron, the engraving of doors and hoods and the exterior mirrors can not be done better in model making. Brake system and diffuser in the rear are great!

BBRmodels also took into account that the rear spoiler is 30 millimeters higher and 40 times longer than the 488 Spider. In fact, the interaction of spoilers and vents and their surface design has a significant impact on the downforce, which in this version compared to the 488 Spider is 25 percent higher. Unfortunately, BBRmodels does not allow us to look at the top-class technology under the chic bodywork: The V8 twin-turbo gets 530 kW / 720 hp from its 4.9-liter of displacement and generates a maximum torque of 770 Newton-meters (Nm), which catapults the 488 Pista Spider to 100 in 2.85 seconds. In 8.0 seconds it is on 200. From there the sports car is braked in 116 meters! The top speed, according to Ferrari is 340 kilometers per hour. Yes, that is truly a reason to celebrate!

Here: Click to the modelcars of the 488 Pista Spider