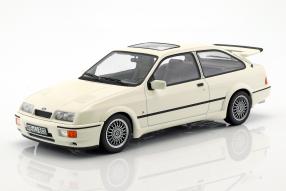 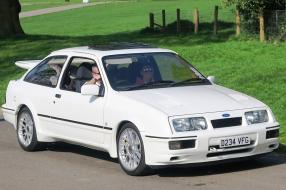 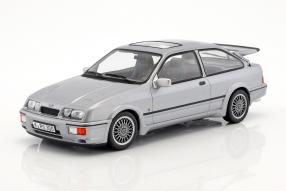 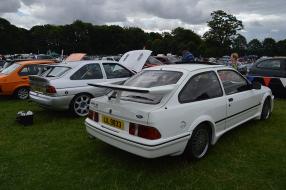 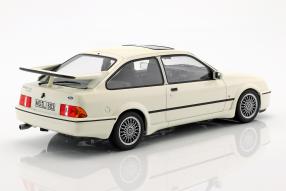 One of the role models had been the topic at the Autodoktoren (Car doctors) on VOX (a german TV channel) last sunday, whose modelcars should occupy us today: Norev delivered miniatures of the Ford Sierra RS Cosworth 1986 in scale 1:18, which come to the collector under the item number 182771 and out of diecast. The US-american car manufacturer had brought a real power limo with this car. The car, which was the result of a cooperation between Ford and the english Tuning-specialists and supplier of the formula 1 - Cosworth - accelerated in 6.8 seconds to 100 kilometers per hour; powered by a longitudinally installed, barely 2.0 liters big four-cylinder, which developed 150 kW / 204 PS with the support of a turbocharger, equipped with intercooler, and ventilation using four valves per cylinder. At first glance, the role model and model attract attention because of: the massive rear spoiler.

This martial-looking component has been wonderfully transferred to the painted miniatures by the moldmakers from Vaulx-en-Vaulin, not far from Lyon. But otherwise, it looks also perfectly, what Norev has put on the wheels: The appearance is true not only in terms of the reproduction of the lines, but also in the details such as the deep recessed headlights whose inner life retold that of the prototypes exactly. Air intakes and turn signals as well as the black ramming protection strip are exactly hit. An eye-catcher are the replicas of the alloy wheels; the fender flares have not been forgotten. The rear end is just as well done; Taillights and the handle for the tailgate are finely crafted details, the rear wing speaks for itself easily and finds like the model additional grip on a center bar.

At the top speed of the sierra of 240 kilometers per hour - where the two-door drove in the class of a BMW M3 E30 series or the Mercedes-Benz 190 E 2.5-16 Evo II - the wing produces an output of 20 kilograms. A glass roof completes the successful appearance of the exterior. However, Norev has also done excellent work in the interior: dashboard, door panels and the replicas of the half-shell seats convince even critical modelcar fans. The leather steering wheel, the typical long gear shifter at that time - all fantastically made. If one buys one of the only 6,000 times built and today very rare Sierra RS Cosworth, in good condition 2 around 30,000.00 Euro become due. His then original price: DM 48,420. The modelcars - even in grey (182770) - are there significantly cheaper. We wish you a nice weekend!

Here: Click to the Ford Sierra RS Cosworth in 1:18 by Norev