Remarkably sophisticated, limited to 500 pieces of each modelcar in the size 1:18 will reach the hearts of the truck-fans 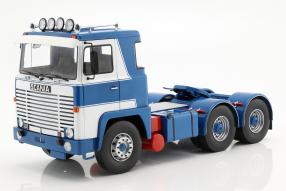 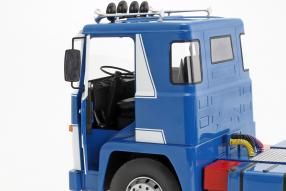 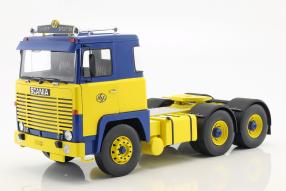 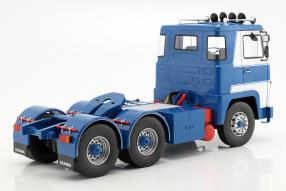 Truck friends have a hard time with us: concerning to the scale 1:43 and a specialized dealer on the one hand and because of the relatively smaller supply on the other hand, we do not carry too many model cars of this type of vehicle: But if a truck miniature reaches our shop, then it is also a very special model, such as the Scania LBT 141 ASG after the model of 1976. The truck is from the small series label Road Kings translated into the scale1:18 and is therefore ideal for complementing sports car collections to this, by an expand eyecatcher. For each 500 units, the manufacturer limits his multi-colored models, which are built out of diecast and not from resine plastic and therefore even have opening doors.

The color combinations green / white / red and white / blue are now available under article numbers RK180012 and RK180013; Limited to 1,000 pieces, the model equipped with steerable front wheels, first appeared in blue / yellow on the market. We are fascinated by the miniatures' attention to detail: Take a look at the radiator grille with its numerous ventilation slots,  the chrome rings on the upper headlights or on the additional headlights and signal horns on the roof of the cabin; so installed only on the RK180012 and RK180013; RK180011 has a nameplate of a forwarding company instead of the additional lamps. All three models have in common the meticulously processed, high-quality door handles and the wiring behind the driver's cab. The replicas of the screws on the rear are also made very well.

Little excursion about the truck

The interior is very easy to see through the openable doors, but looks a bit sparse in the instrumentation - the standard of 1976 owed. Formally, Road Kings has hit everything correctly; inside as well as the appearance of the truck in the exterior. Let's take a look at the model: The first two digits of the three-digit type designation stand for the cubic capacity of the engine; The L 141 is 14 liters, which delivered a maximum of 275 kW / 375 hp in the LBT 141. The "1" behind it denotes the generation of the car; 1968 was started with the "0" and 1974 went to Serie 1. The LBT stands for truck driver's cab tandem; the "T" stands for the double axis; The LBT 141 is therefore a three-axle with two driven rear axles: Now available in 1:18!

[11.01.2019] For the fans of both worlds: modelcars concerning Stars from movies and TV