Minichamps reminds with the new miniatures of the type 8N in the scale 1:18 to a time of departure mood at the people from Ingolstadt 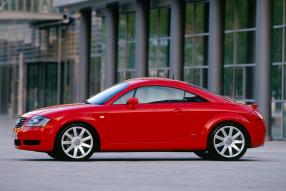 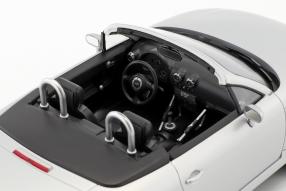 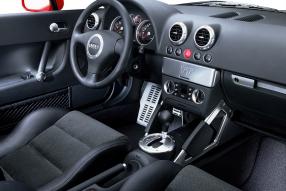 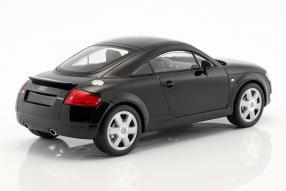 Audi was not always the premium brand, as the company with the four rings in the logo is known today, but at least with the Audi V8 of 1988, it became clear that the team from Ingolstadt wanted to catch up with Mercedes-Benz and BMW. The fact that the upgrade of an image also fits a sports car is not new. In 1994, when the first Audi A8 came to the marked, Audi also caused a sensation with the studies of the Audi TT: designed by Freeman Thomas and designed by Romulus Rost, design chief Peter Schreyer presented a puristic idea that should made its way without a big change on the road: The Audi TT of the type 8N was born, went into sales in 1998 and was supplemented 1999 by a cabriolet. Minichamps picks up the topic of TT again with the model cars for coupe and roadster.

The coupe appears in black under the article numbers 155017021, the Roadster in silver paint under 155017031, in each case the quantity amounts to 300 units and they are built out of diecast. Minichamps refrains from opening doors and hoods on these model cars. At the time, Revell was able to do better: When the Audi TT thrilled the fans, they pulled the 1:43 scale model cars out of the hands of Minichamps - the TT is said to have been one of Minichamps' most popular models - but in scale 1:18 the Revell sparkled with all functional parts around. That was really funny! Both with and without rear spoiler: Due to a difficult and dangerous driving behavior for inexperienced drivers, the chassis was revised and the car became a spoiler mounted on the rear.

A round butt is not a thing for everyone

The TT was built on the platform of the Volkswagen Golf IV, which served as the basis for several types. The Audi TT came on the market with the 1.8-liter four-cylinders, which made 132 kW / 180 hp and 165 kW / 224 hp. A four-wheel drive system was available as an option. As crisp as the butt of the first Audi TT also looked: The attempt to pick up its appearance in the 1995 Audi A6 C5 series, was probably a mistake. Among experts it is still said today that the round tail has cost 15 percent buyers. The successor generation of the TT from 2006 lost its enthusiasm: it was more comfortable, but an abandoned concept: The hearts of the purists remained attached to the original version, produced in Györ, Hungary, to the addition of the above-mentioned novelties a gray coupe (155017020) and a Black Roadster (155017030) is available.

Here: Click to the Audi TT's in 1:18 from Minichamps