The prototype was already introduced in June 2016, but only now does the really relevant version of the model car to the beast of the Green Hell come on the market 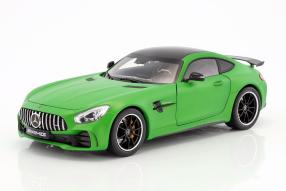 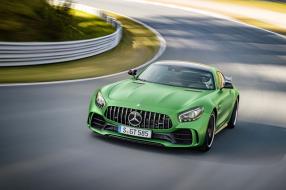 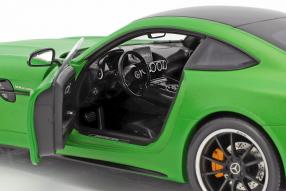 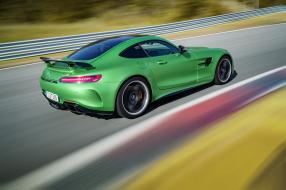 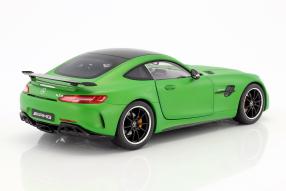 What lasts long will eventually be good - a proverb that is brought to life, especially in the case of the Mercedes-AMG GT R and its miniatures: The super car from the C 190 series celebrated its world premiere on 24 June 2016 in the presence of Formula 1 Driver Lewis Hamilton on the site of the traditional English racetrack Brooklands. It was released on November 21, 2016 and launched in March 2017 in Europe, but for a long time fans of the 1:18 format had to wait for the matching model car in the right color: Norev takes on the Green Hell beast and delivers the miniatures in die-cast zinc; painted in the prototypical color AMG green bright magno and thus the model on which the die-hard fans had to wait a long time. We look at miniature and prototype.

More power, a revised aerodynamics, a stronger engine and a new look in the front - these are briefly the essential distinguishing features of the Mercedes-AMG GT R to the basic models. For this purpose, the sports car introduced an innovation from which now benefit the other members of the GT family and the Mercedes-Benz in the SL, the CLS and the new A-Class applies: Mercedes-AMG built in the GT R the so-called Panamericana grill first time for a street-legal car. Its form with vertical struts celebrated its premiere in the customer racing race car GT3 and recalls the grille, as he has determined in the Carrera Panamericana - a race on public roads across Mexico - the shape of the radiator grille of participating in 1952 Mercedes-Benz SL.

In addition to these changes to the appearance of the new GT R has been significantly expanded in the equipment scope: He receives an extensively modified suspension, wider rear fenders, massive front and rear aprons, active rear axle steering, nine-way adjustable traction control and an adjustable coilover suspension kit with additional electronic control. The front bumper is delivered with active elements; the rear spoiler offers a double diffuser. Thanks to the use of titanium for the rear silencer and thin-walled stainless steel for the front area of the exhaust system, the specially developed exhaust system saves around 6 kilograms weight compared to the AMG GT S. The hexagonal tailpipe in the rear apron emphasizes the racing character. Further tailpipes are located on the left and right in the diffuser.

Strongest engine of its series

Their panels are coated with carbon, just like in racing, to protect the diffuser from the high exhaust gas temperatures. In the series, the exhaust system is equipped with infinitely variable exhaust flaps, which directly influence the sound of the AMG GT R. The flaps open and close depending on the selected Drive Select travel program, but can also be individually controlled via a separate button. In the Comfort and Sport settings, the V8-typical, low-frequency sound is adjusted for comfort. In Sport Plus and Race the sound composition is much more emotional. The new athlete's heart pumps more than ever: the 4.0-liter V8 bi-turbo engine in the GT R delivers 430 kW / 585 hp and thus 46 kW / 63 hp more than the GT S with 384 kW / 522 hp.

Mercedes-AMG celebrated with the new GT R a tribute to the Nürburgring, which is well known to the fans of motorsport as the Green Hell. This led to the naming of the paint AMG green bright magno, the Norev used as mentioned for the model car in 1:18. In the model with the article number B66960416 we recognize all those features that we already know from the miniatures to the basic models: A perfect with the model covering impression by the exact transfer of lines and design to the miniature. Doors and hood are to be opened; a detailed interior is waiting for the collectors. Under the bonnet, there is a carefully designed replica of the drive set, which unfortunately remains with the purchasers of the motorsport versions of the GT3 Norev deprived.

Click here: for the model cars of the Mercedes-AMG GT R