The T3 as Joker and bus as well as the T2 we already know. With the pick-up truck, the Fürths again provide a highlight. And what will happen next week. 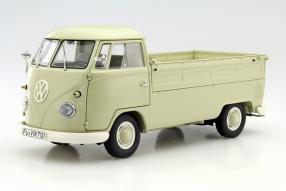 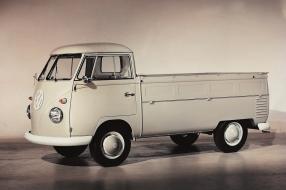 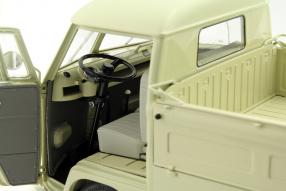 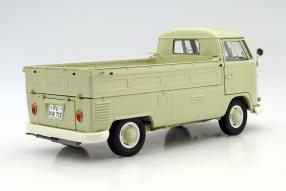 Weekend, dear friends, once again we managed to get the work week behind us: time to switch down a gear and make it more casual. This is an perfect match for the new model car from Schuco, which takes the VW T1b as its model as a pickup truck. We will be talking about the company from Wolfsburg: "The task area gives it its name: Transporter, under this designation, the millennium begins its success story, is the founder of a new vehicle group and until today its leading representative 1.82 million vans of the first type - initially still in Wolfsburg, since March 1956 in Hanover. "

Schuco and the love for the Bulli

With the 1:18 Edition, Schuco has discovered the love for the preparation of the VW Series Type 2 and has brought us back into the early days of the transporter with the lime green model car. The flatbed was presented in 1951; The model from Schuco corresponds to the revised version of 1959, which can be seen on the new bumpers and the winker. The latter replaced the hitherto used winders. Schuco states that the model car models the years 1959 to 1963, which the cone-shaped blinkers occupy. Behind the hood, which was foldable at the miniature, a box-top engine with 25 kW / 34 hp from 1.2 liters displacement, which Schuco can reproduce as usual with the other models on the subject of VW Bus, was a model. Switching down so quasi ex factory. Comfortable. Perfect for the weekend.

The loading area practically formed the roof of the engine compartment. Underneath it, Volkswagen used a closed shaft; The bunk received foldable side walls all around. It was just this, as well as its lever, that Schuco masterfully put into the 1:18 scale: the shaping of the small, functional components is fascinating. The shapes of the windshield wipers, the exterior mirrors as well as their mountings and the hinges of the doors have been equally successful. Even if the small Volkswagen looks a little bit simple, it is from the viewpoint of the model builder a Geniestreich, because authentic up to the last fugue of the scale correctly reproduced frame that makes up the bottom of the model. Schuco has met the look and feel of the model perfectly and together with Volkswagen created a very beautiful, lovingly relaxed looking model car. Just the right thing for the weekend.

What will happen next week

It is a bit more rapid on Monday, because we are again dealing with BMW at Minichamps. The Aachener are serving us with the Touring Cars of the series E9 real treats: The BMW 3.5 CSL has been a victory type on the racetrack, but as a modellauto almost worthy to win an Oscar, so well he is staged. In the shop you can already see the pictures of the miniatures in 1:18; More about this in the blog. And then, on the 1st of February, the day when the Toy Fair in Nuremberg opens its doors. What Minichamps is new about, we already know. And we will share this information with you from the first day of the fair. Also by Twitter. Until then: Let it go well for you! Have a nice Weekend!