The high-price label presents a miniature with a multitude of outstandingly well-made details that are eye appealing with a best performance. 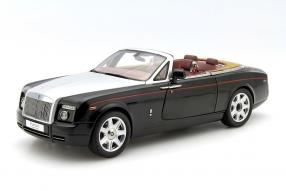 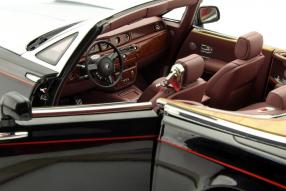 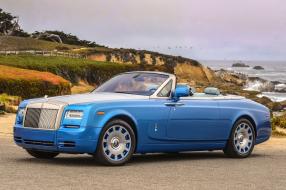 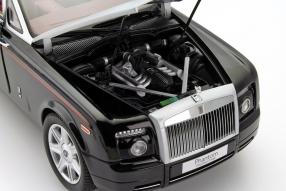 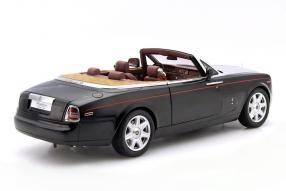 Loyal readers of our blog know that Modellautos from the manufacturer Kyosho are among the best miniatures available on the market. Especially in the 1:18 scale the label with the precision of the functional parts belongs to the manufacturers, which many competitors have to measure themselves. With the now released Rolls Royce Phantom Drophead Coupe, Kyosho delivers a real masterpiece, which the collector can purchase under the item number 08871DBK and which offers a detailed engine compartment, a fully lined trunk with pull-out loading floor as well as a dream of interior and faucet panel. Of course, the processing is absolutely top, which one at the price of 219.95 euro may also demand. We have looked at the model in the color combination Diamond Black / Deep Red Hood once more.

In length, the model of the 5.6 meter long model measures 31.17 centimeters. And this model is the current convertible series of the British car manufacturer and the second, newly developed model under the direction of owner BMW. At the North American International Auto Show 2007, the original version celebrated the world premiere; In 2012 came a facelift on the market, which is the model of our model. Based on the 100 EX study from 2003, the responsible designer Ian Cameron took over the brushed aluminum bonnet and the teak-wood elements at the rear into the series. Both Kyosho has imitated bravely in this model car. In the original, the wooden cover consists of 30 parts and is enclosed by a frame made of aluminum, which protrudes from the bonnet and encloses the windshield frame.

Kyosho offers the model with all-opening doors and hoods that have been reproduced in great detail. The attention to detail goes so far that the trunk lid of the Rolls Royce model has been split again and the collector can pull out the loading floor. We say, "Wow!" Breathtakingly beautiful, Kyosho reproduced the dashboard, whose different materials are exemplary and show a processing quality which is not so common in 1:18. Unrivaled in the finish: the wooden inlays, the design of the fan nozzles and the look of the steering wheel. The convertible top consists of five layers, the lowest of which is Kashmir. Kyosho attaches a roof to the model so that the collector can present it open and - according to the autumn season - closed.

Top grade: What else?

Flooring, safety belts and the engine of the Rolls Royce Drophead Coupés have been implemented with the utmost care. Under the bonnet, the collector finds a very knowledgeable miniature of the drive set, which fetches the Series II 338 kW / 460 hp from 12 cylinders and puts a maximum torque of 720 Newtonmeters (Nm) on the crankshaft. The look and look are the same in every possible way. The headlights modified at the Facelift 2012 were also presented as a model. Apart from AutoArt, there is hardly a model builder who builds such good model lautos in this price class: Top grade!