The Stuttgart automaker remembers one of his most enchanting series,with a exquisite model cars in 1:18 scale made by Norev. 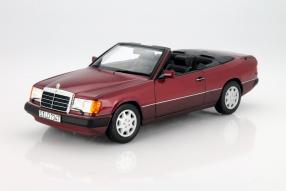 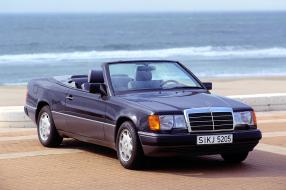 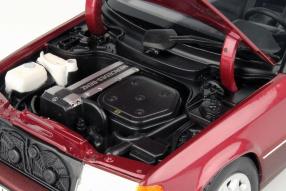 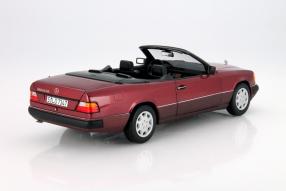 Sunny prospects - and thus suitable for the coming summer Sahara this week - offered Mercedes-Benz at the International Motor Show (IAA) 1991 in Frankfurt. There had in September 25 years ago an elegant Cabriolet Premiere. The four-seat vehicle with soft top is part of the 124 series, which is called E-Class from 1993 onwards. The IAA debut grabbed both a success story of the Stuttgart brand, because Mercedes-Benz brought out with this guy after 20 years of interruption for the first time a four-seat convertible. In the current program of the brand with the star this body shape with the open versions of C-Class, E-Class and S-Class is prominently represented in different engines. Norev has brought to so-called A-class 124 model cars in trade.

The Cabriolet engineers developed high constructive effort from the coupe. In particular, it stiffened the body to make the open four-seater as comfortable and safe as the other members of the series Family. These approximately 1,000 parts are completely redesigned. Supporting structures are made of thicker or high-strength steel sheets. All highly stressed points received additional reinforcements in the form of doublers, gussets or braces. This also included the well-known from the SL sports car of the R 129 series diagonal braces. There were also mass damper in the left shock absorber strut, the roof frame and the side boot recesses. They reduce annoying body vibration, such as may occur in open vehicles through the missing roof structure.

The first E-Class Cabriolet was built to 1997th 15,380 customers opted for a four-cylinder version, 18,572 buyers chose a model with six-cylinder engine. Norev has the model car in almandine Red Metallic, Nautical Blue Metallic and the popular Blue Black Metallic gefertig, it equipped with opening doors and hoods and given him steerable front wheels and an attachable roof along the way. The well-crafted model car of the Mercedes-Benz 300 CE-24 Cabriolet match the finish and appearance exactly the still coveted model. Under 15,000 euros none of the magnificent four-seater is to have today. To all our fans a good start to the week.