The traditional label from Italy presented a 488 with opening doors and hoods. In this the equivalent of BBR doesn&#039;t have. Both are still top. 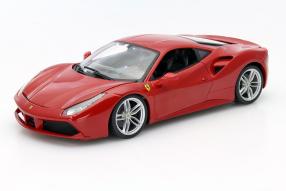 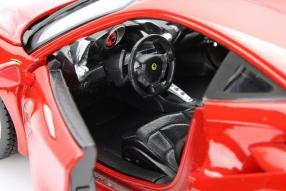 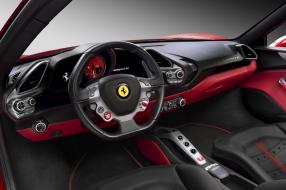 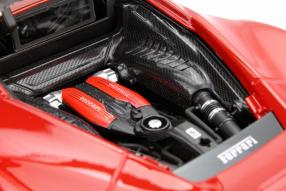 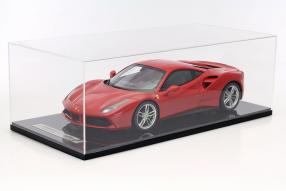 The Ferrari 488 is the successor to the Ferrari 458 and was in the beginning of March 2015 at the Geneva Motor Show and Accessories for the first time to the public. Bburago now delivers a fantastic, very well-done version in 1:18 scale, the label has become with the Ferrari F40 in 1987 really popular. Exactly at this level is now also the small 488 GTB road which shows us with a wealth of details and features around opening doors. The price of 39,95 Euro is considering its great features a genuine special offer. When another new model in 1:12 scale which is not so easy to say that the small series Label BBR demands for unlike the Bburago resine plastic produced 488 whopping 1089.95 euros, but is such a model with a circulation of only 250 piece something very exclusive in the apartment.

With the Ferrari 488 - GTB stands for Gran Turismo Berlinetta - have both Bburago and BBR taken a real piece of cake from the automotive industry for example. The 488 is powered by a V8 engine with a cylinder angle of 90 degrees, which generated from 3.9 liters capacity 492 kW / 670 hp. The engine has 4 valves per pot and 2 IHI ??twin scroll turbocharger, intercooling and direct injection. 760 Newton meters (Nm), the maximum torque is indicated. In the acceleration of the 488 GTB sets with 3.0 seconds from 0 to 100 kilometers per hour and 8.3 seconds from 0 to 200 real peaks before. The maximum speed of the inside equipped with lots of leather and Alcantara 488 GTB Ferrari is at 330 kilometers per hour.

It is shifted as in the Cabriolet version Spyder - which we will report in the next few days - a seven-speed dual-clutch transmission that channels power to the rear wheels. The aerodynamic characteristics of the 488 were significantly improved compared to the previous 458: Among other things, the output of large cooling air outlets in the hood, active dampers at the rear, turbulators could be increased to the underbody by 50 percent. A little bit of top-class technology we see the model of Bburago especially when you look under the hood. Toy detention as once lived in Bburago this is not what is on offer to collectors there: Tricolor, with meticulously recreated carbon structures and considering all aggregates.

The dashboard is flawless in design, but in the elaboration of the model the multifunction steering wheel we would have liked a little more attention to detail. It is not so colored, such as in models of Kyosho or even BBR. Which brings us at 1: 12-model would be, which traces the details in easily visible through the large panes interior much better than the smaller Bburago. Instruments, switches, the look of the side panels, seats - sensationally good quality, added when evenly also rather more expensive. The exterior is good at two miniatures: Both Ferrari and BBR have taken the appearance of the model exactly; the look of the models agrees perfectly with that of the Ferrari 488 for the road. The winner of the heart remains the 488 GTB of Bburago, because we simply delighted that this label the history of his house and retold by Ferrari on this successful way.


We wish you a nice Easter weekend: Happieness in the circles of those who mean the most to you!