The French model car specialists bring an exclusive model for modelissimo and ck-modelcars.de 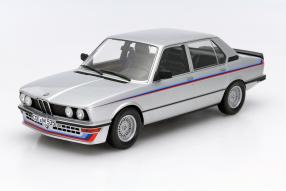 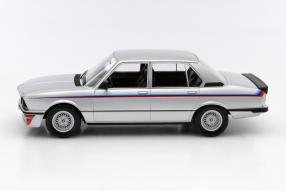 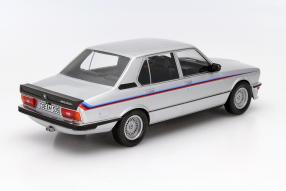 BMW is celebrating the 100th anniversary of the brand. This is a great occasion for looking back into the history of the Bavarian Motor Works, which help the model car at all scales. The M535i puts a milestone from Bavaria in our focus. The image of success BMW M1 from the 1978 animated the BMW Motorsport GmbH to another vehicle, the engineers developed and built in 1980 on the basis of the Series 5 Series the M535i. He got the two-valve six-cylinder from the 635 CSi transplanted under the hood: 160 kW / 218 bhp, the 3.5-liter engine and made the BMW 5 Series with 310 Newton meters (Nm) maximum torque to the king of the fast lane; a wolf in sheep's clothing, which the power was not to look at first glance.

And that is still true today, because the relatively brave and unobtrusive design of the E12 series acts still innocent and harmless; up on front and rear spoilers of course. Norev has the lines of the first all-BMW 5er perfectly implemented in the scale of 1:18, especially the details of the mounted on the bow spoiler captured well. But the appearance of the whole vehicle coincides with that of the prototype, which already corresponds to the way the facelift, which can be seen at the larger taillights. The model conveys the look of the success story in metallic silver and using the typical for that time decorative films to collectors. In its day, compared to today larger windows also provide the model for a generous view into the interior with the technical proper recreated interiors.

Thorough work in the interior

There the model car specialists from Vaulx-en-Vaulin have not splash out and let the M535i bestow a variety of beautiful details, such as in instrumentation, the trim elements and the control elements. Nevertheless, it is a bit sparse on the interior, but as it was just at the beginning of the 1980s. That way, we have also found the BMW M1, to which we have published an article can be accessed via this link and was also equipped contemporary sparse; far more barren than today it is supercar. And in this category of M1 fell at that time, which has made in the minds of the managers of BMW and their customers the way for the M535i and all his descendants.

More in the above embedded video. Have fun watching!