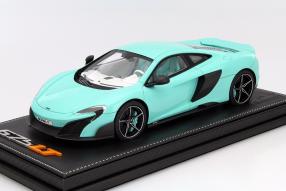 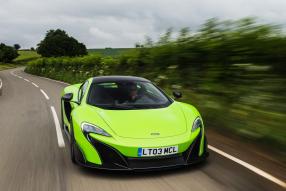 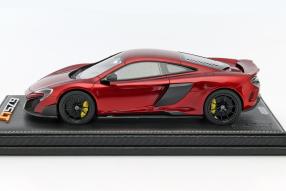 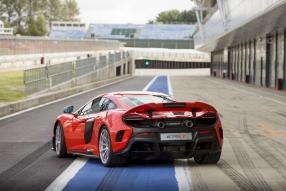 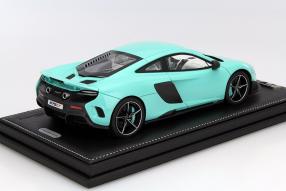 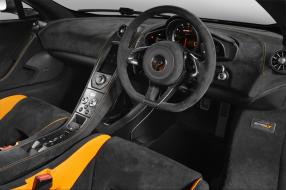 At the Geneva Motor Show and Accessories 2015 presented the McLaren Super Series for the house counted before McLaren 675LT, you to whom we can now imagine very good, but not quite cheap model car. The McLaren mainly by their successes in the Formula 1 world become popular brand Automotive shares its model range in 3 divisions on: Into the Sports Series, the base models 570GT, 570S Coupé and Coupé 540C are sorted; McLaren P1 and P1 GTR include in the Ultimate Series, thus representing the top of the range. In the middle there is the Super Series, the McLaren from the individual models 675LT, 675LT Spider and composed 625C and 650S. The 570GT debuted this year on Lake Geneva; a year earlier the 675LT drew attention to himself.

McLaren brought the 675LT, the legacy of the long tail tails, to life and sets in the new supercar the focus on light weight, improved aerodynamics, improved performance and aligned to track dynamics and driver orientation. From 0 to 200 kilometers per hour - at 100 we keep on not because he would be in 2.9 seconds - start the McLaren 675LT in 7.9 seconds. 100 kg weight savings make the 675LT the lightest in its class and provide a power to weight ratio of 549 hp per ton. When 675LT the fun is in the foreground, and pleased as a fan of beautiful cars that is so clearly emphasized. The 675LT is offered only as a coupe and is the strongest aligned to the track model in McLaren Super Series.

The maximum speed is given as 330 kilometers per hour. One third of all parts have been modified since its base 650S, which is also part of the Super Series. The opposite the 650S improved engine of the McLaren 675LT with 3.8 liters of displacement from 8 cylinders has more than 50 percent of new components: More efficient turbochargers, detailed changes to cylinder heads and exhaust manifolds, new camshafts and lightweight connecting rods, a stronger-sized fuel pump and an improved injection. These changes are so significant that McLaren has given the power set a new name: M838TL. The engine produces - as the name of the car suggests - a power output of 675 hp.

This corresponds to the equivalent of 496 kW. The 675LT show a darker side of McLaren, the one above is not got to see, the words of the manufacturer at the premiere. Specific stylistic elements of 675LT are the enlarged carbon fiber front spoiler, extended door Finns and the enlarged air intakes at the circular end pieces of dual tailpipes made of titanium - a reference to the power of the strongest, lightest model of McLaren Super Series. All these details have accurately transferred to the produced resine plastic model car 1:18 scale the shape of Bauer Techno Model. The active Airbrake longtail at the rear of the vehicle is 50 percent greater than that of 650S and due to its structure made of carbon fiber it even easier.

This is just one of the improvements that lead to the bottom line to a dry weight of only 1230 kg. What he comes to meet on the racetrack: The 675LT is as it designed as the street. Around one third of the parts have been changed to be worthy of the honor, the model range from 650S Coupé and Spider - which will continue to produce - to supplement. It's name is derived from the McLaren F1 GTR Longtail: In addition to the revised, longer body, Longtail was 1997 more than 100 kg lighter than its successful predecessor. As almost 20 years earlier, the core focus of the development program of the 675LT was as silent nod to his big brother to a weight reduction of 100 kilos.

The McLaren 675LT is in 5 "By McLaren" - available trim levels; the color options never before offered Silica White, Delta Red, Green and Napier Chicane Grey are newly elaborated shades for the McLaren 675LT. The legendary McLaren Orange completes the color palette, which is reserved exclusively for the sports car. The each 379,95 Euro relatively high purchase price of the thumbnails can be explained by the very small numbers, the Tecnomodel brings the 675LT: From red and pearl white model are both 35, have been launched from the orange and red each 40 units. Appearance and look of the high-class processed models comply usual perfect the appearance of the model like that label. In the interior, a flood of details can be seen extending to the logo of the 675LT on the headrests. A noble-sighted base plate and a display cabinet are supplied with the model.

We wish you a good start to the week. It should be a spring-like Easter! But there are also people who claim that the earth was flat.