99 percent of all Mini to be leased. With this model car no funding is necessary because with 34.95 Euro it is one of the cheapest and best deals. 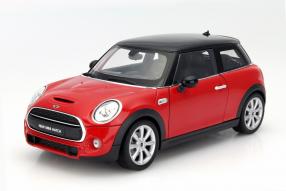 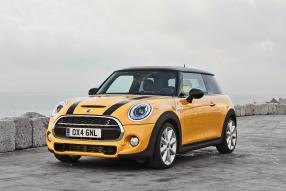 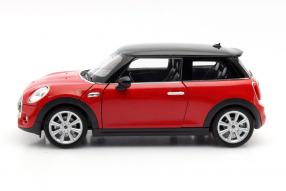 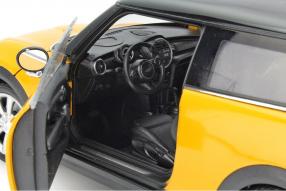 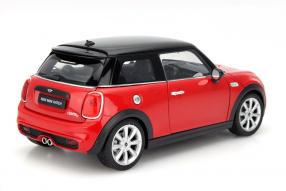 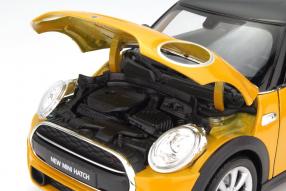 The reawakening of the MINI brand by the Bavarian automaker BMW in 2001 was so successful that in March 2014 they launched the third edition of the basic model in the sale. Welly now brings the right model in size 1:18 on the market, which represents the version with 2 doors and the large tailgate. Available is the little car on a large scale in Volcanic Orange and the famous Red Chili, which accompanied from the outset, the new edition. Welly has the proportions of the model accurately hit and the look of the same on the licensed by the BMW Group model transmitted without errors. The car model is made of die-cast zinc and therefore offers all around to open doors and hoods. We look at the little runabout in detail.

Facts about the model

Mid-November 2013 celebrated the internally named mini F56 its debut at the Los Angeles Auto Show; in March of the following year he was introduced to the markets. The engine range offers in the range petrol drive sets of 55 kW to 170 kW, which corresponds to 75 hp to 231 hp. For this, the car needs 1.2 liters to 2.0 liters; which are distributed in the smaller motors on 3 cylinders in line. The diesel include a power range from 70 kW / 95 hp to 125 kW / 170 hp, which the latter drive set with its 2.0 liters is a four-cylinder. Strong performances so even when driving and not only with its distinctive appearance. Say goodbye to the fans had from the central speedometer, which was replaced by a new multimedia system with integrated Ambilight.

The model car from Welly is characterized by this detail very satisfactory. Also, all controls, switches, instruments and the door panels of especially among working women as trendy small car have the model engineers from Welly modeled accurately. The way how the interior door frame was rebuilt along with seals of the frameless doors per se or disks, we like as well. Satisfactory is also the construction of the mirrors and their shaping. There have been very nice, the headlights and the much larger compared to the previous taillights. That the connection of the side moldings not completely clean adjoins the bar of the tailgate, but should be mentioned.

A dream on the other hand: The Play of light alloy wheels, the brake discs and calipers. The door handles have been executed with the prototype as door handles and clean converted to the scale of 1:18. Excellent in the finish: The entire design of the front with the larger grill, whose chrome surrounds and the integrated fog lamps. The air intake on the hood is well worked out, the lettering on the board of the license plate attachment also. The more angular, lower grill is modellbau technically perfect, but we like it when a model? Rather not. Only when the motor car model weakens slightly; the black plate is indeed thoroughly three-dimensional, but unfortunately only one color runs. For the price, it is nevertheless become a recommendable, nice model car, probably the strongest among the small cars. And as a model, a real nice price.