The model car in Glacier White really fulfills every requirement that a fan can want in a model: Kyosho is the perfection in modeling. 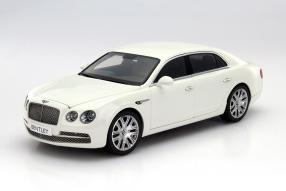 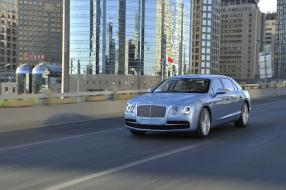 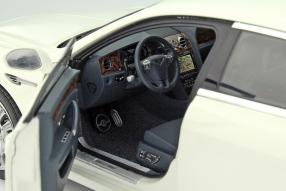 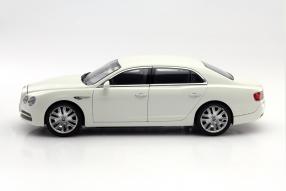 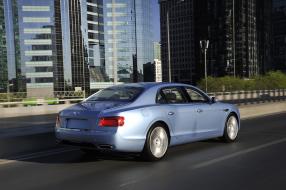 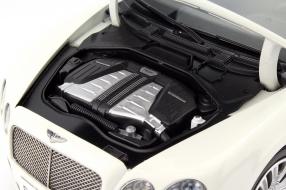 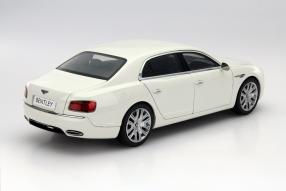 Yes, EUR 199.95 is a lot of money. But measured to what the modelers of Kyosho deliver with the 1:18 Bentley Flying Spur. The car wins every price / performance compared to many other car models of it's size. Besides the overwhelming flood of many details especially in the interior of the luxury cruiser, for the showcase it is the finish, with the outer skin the bring ethusiasm.

Let's look at the model of the 2nd generation of the Flying Spur and Take a closer at it: The model is the successor of the Continental Flying Spur, who had been declared with the model change in the name Continental to not only visually by coupe and convertible, but just delineate also the name of her. Kyosho has already presented the model in the colors of onyx black and Peacock-dark blue. Now Glacier White's turn.

Based on: Bentley Flying Spur II


The British-German carmaker Bentley sent his luxury sedan at the 83rd Geneva Motor Show into the second round. Compared to the first edition - like the Continental GT coupe and GTC convertible it shares the platform with the VW Phaeton - translated the designer of Bentley the new Flying Spur II on athletic lines and a more powerful, more sporty lines that already in the big car stand fast lets look. With its exterior length of about 5,299 meters enters the Flying Spur II against the long-wheelbase version of the new S-Class, which is around 53 millimeters shorter. Traditional Bentley features such as the now steeper standing grill were combined with a sporty stance and contemporary details that Kyosho has transferred to the with its length of 30 centimeters impressive miniature die-cast zinc.

With the acceleration of a sports car

So-called Sharp-Function lines were supplemented by LEDs in daytime running lights, dipped headlights and taillights. Handmade natural leather and veneers in the interior, which is based in the lines on the predecessor model and shows the layout of the VW Phaeton in the arrangement of switches and instruments. Is powered with the new Flying Spur in principle known, but revised for the new model 6.0-liter W12 engine with twin turbo technology, which was coupled with the coming of ZF eight-speed automatic. With its 460 kW / 625 hp the car 800 Newton meters (Nm) torque brings. Thus, the new Flying Spur according to the manufacturer more power than any other Bentley four-door model in the brand's history. In just 4.3 seconds, it accelerates to 100 kilometers per hour.

The Bentley's top speed is at 200 mph (322 kph). By means of its four-wheel drive brings the car to power with a torque distribution of 40:60 on the road. For such a great car are also expressed like its leaders, such as Bentley Chairman and Chief Executive, Dr. Wolfgang Schreiber: "Bentley's new Flying Spur is the ultimate luxury sedan Our engineers have worked tirelessly to ensure that the Flying Spur perfect. combination of performance, comfort, sophistication and handmade quality offers; equipped with the latest technology the styling of the new Flying Spur is a new design language for Bentley. an elegant direction by a lower, wider appearance with sharp lines and gently curved surfaces reflect. "

Hit lines of the model exactly

A lower roofline, and a muscular rear give the Flying Spur a more aggressive stance and a powerfully dynamic profile, Schreiber adds in his remarks. Eben this impression and the model car 1:18 scale that Kyosho brings in collaboration with Bentley as a so-called advertising model in Bentley-packaging under the Bentley Boys. The model construction engineers have managed to reduce exactly the intricacies of design and its appearance and proportions in the Bburago scale. But the model car also thrilled with the filigree modeled grille whose honeycombs were executed technically clean. Both grill grid - both the main grille, as well as the side grills in the front apron - leave the model car haptic appear very noble.

Our conclusion: Technically the perfect model

This also applies to the replicas of the headlamps, whose interior was modeled after authentic and their clear glass covers without joints einschmiegen adhere to the die-cast zinc body. As with the usual Kyosho opening doors and hoods are gap-free on to the body. The model car permits it, that the collector can open all the entrances; thus the fan gets a great insight into befitting Model car technology. Whose cover is at the engine, for example, been recreated multicolored and at this point the relationship can recognize also provided with the W12 VW Phaeton. Trunk and interior are knocked out by Filzbeflockung. Seat belts, door trim, navigation system screen and instruments record the situation of the model according to extremely detailed. The only thing you can't do with it is to Sit down and drive away. too bad!