Last Tuesday, Spark delivered modelcars to a 914/6 in scale 1:43, which puts the entire series in the spotlight for a throwback on Thursday 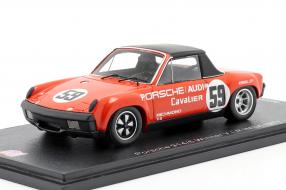 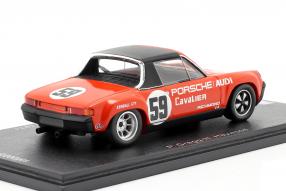 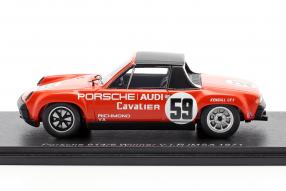 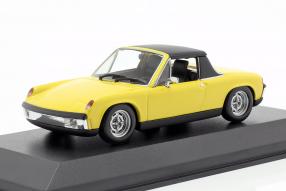 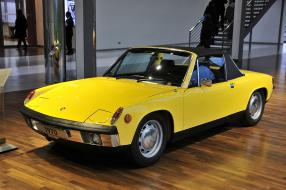 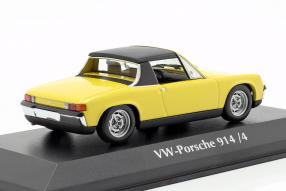 911? Porsche, the nine-eleven, knows everybody! 914? Yes, that was also a Porsche, however, its correct model designation is not that familiar today. But fans know anyway that the two-seater, which was a three-seater due to its emergency seat in the front, was planned as a co-production between Volkswagen and Porsche and as such it had a hard time from the beginning. During a press demonstration, the motor sportsman and then marketing director of VW-Porsche Vertriebs GmbH, founded in 1969, Fritz Huschke von Hanstein, asked the journalists not to mention the name of the VW Porsche called Volksporsche in the media with "VoPo", the abbreviation for the People's Police to disparage the GDR. Around 120,000 pieces left the production lines at Karmann and Porsche: Spark is now launching a new 914/6 and Minichamps is leading the 914/4 in the Maxichamps series.

Let us take a look back: An oral arrangement between his predecessor Heinrich Nordhoff and Porsche boss Ferry Porsche, canceled by VW boss Kurt Lotz, is said to be due to the fact that the VW Porsche 914 was created. It should be the new entry-level model of the Stuttgart, because the 912 did not meet the expectations placed on him. The 914 should leave the production band as VW and Porsche; the discussion about rights and costs led to the foundation of the sales company mentioned above. The 914 with the designation 914/4 was delivered with a four-cylinder boxer engine, which came from the type 4 (Volkswagen VW 411) and picked up 59 kW / 80 hp from 1.7 liter displacement. A granate, as the author of this article knows literally from own experience. In the 411 LE, the drive set turned out to be real fireworks; however, a pretty thursty one.

Whether the modelcars of the Porsche 914/6 - limited to 300 units - which are available in format 1:43 under the item number US081 and its role model with which Peter Gregg and Hurley Haywood won with the Brumos Porsche Audi team at the Danville 300 at the Virginia International Raceway as part of the the IMSA 1971 - a tuned production vehicle or a factory upgraded 914/6 R or 914/6 GT and thus producing 140 kW / 190 hp or even 154 kW / 210 hp, we cannot say anything binding. Obviously, however, they have the optional fender flares made of steel, such as the 32 Porsche 914/6 R built in the factory, which were named because of their classification by the FIA 914/6 GT. The sports car manufacturer officially delivered around 400 GT kits. A strong collection area, which you can reach via the link embedded below.