19.05.2020Schumacher unforgettable: Looking back at the early days

With two modelcars in scale 1:18 from diecast, we remember the early times of the racing driver from Kerpen: the Benetton B193B as well as the Mercedes-Benz 190 E DTM 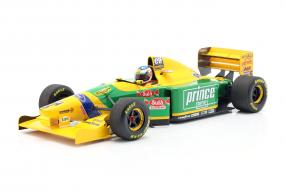 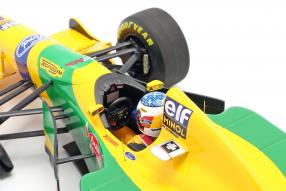 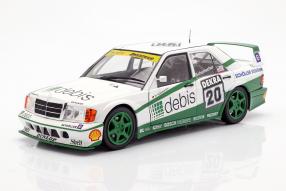 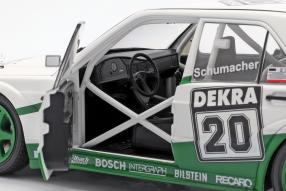 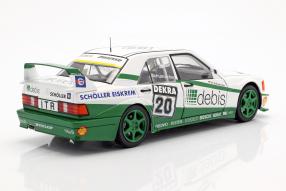 Nowadays, Michael Schumacher is primarily associated with the five world championships for Ferrari by his fans. But there were also times, where he was still not the champion in red: In the year of his debut in the Formula 1, 1991, he had started for the team Zackspeed Rracing in the DTM, where he was not very successful. After his premiere in Belgium and a race at Jordan Grand Prix, the Kerpener switched to Benetton in 1991, with which he became world champion in 1994 and 1995. Exclusively for ck-modelcars.de, Minichamps launched 300 modelcars of the Camel Benetton Ford B193 B by Michael Schumacher from the season 1993 in scale 1:18 in the 25-year collection. The modelcars of the Mercedes-Benz 190 E 2.5-16 Evo II, which Solido offers the Schumacher collectors in scale 1:18, are reminiscent of his races in the DTM.

With the model of the miniatures of the Benetton-Ford B193B from Diecast available under item number 113930605, the ultimately seven-time world champion competed at the Monaco Grand Prix in Formula 1 in 1993. The model offers fans of Michael Schumacher a replica of the cockpit true to the original with a driver figure, a filigree chassis and the matching decals. The model was initially exclusively powered by a Cosworth Ford V8 of specification VII, so in Monaco, too. Schumacher started behind Alain Prost from the front row and led the race after a misjudged penalty from Prost for his early starts, but had to stop the Benetton after 32 laps due to hydraulic damage. Ayrton Senna took the lead and won for the team that created today's Renault F1 team.

At the racing weekends six and seven of the season 1991, Schumacher started for Zakspeed Racing in the German Touring Car Championship (DTM). The French label Solido reminds on these races with the modelcars of the Mercedes-Benz 190 E 2.5-16 Evo II, which appeared under item number S1801004 in scale 1:18 and offer openable doors, a true to detail interior as well as steerable front wheels. The role models had a four-cylinder with a cylinder hear by Cosworth, developed 282 kW / 370 hp and brought in the racing version only 980 kg on the scales. However, in the car with a roof, the then 21-year-old Schumacher did not feel comfortable: According to racing driver Roland Asch later about his prominent colleague, he was more the type for open racing cars. That's right: zero points, rank 30 in the statistics of the 1991 DTM.

Here: Click to the modelcars to the topic Michael Schumacher