With sensational modelcars of the Ford GT40 from 1966 in scale 1:12, the US-manufacturer cupps our pocket money account, but delivers an artwork 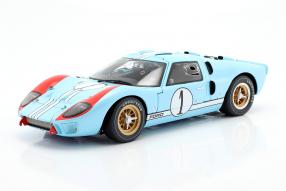 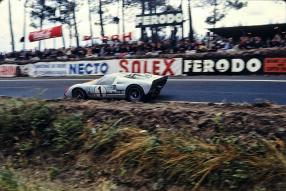 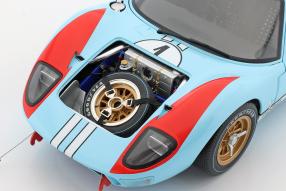 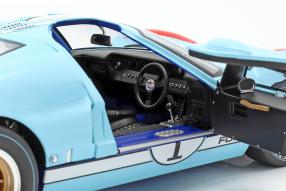 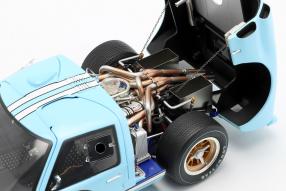 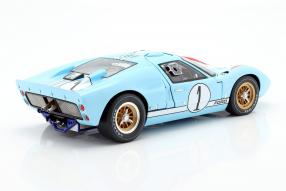 The Ford GT40 is now one of the regulars guests in the many different scales in the blog that has been published here for almost five years. The sports car, however, counts to the most popular role models, and not just since the feature film "Le Mans 66 - Against every chance" was released last year, which tells the origin of the Ford GT40 as well as the fight between Ford and Ferrari about the supremacy at the 24 Hours of Le Mans. The US label GMP presents not so cheap, but sensationally made modelcars in the trendy large scale 1:12, which sets accents with its opening doors and hoods, but also convinces with its interior. In time for Throwback Thursday, we want to take a look at these miniatures, which are limited to just 100 units for the driver pairing Miles / Hulme.

Modelcars in scale 1:12 are popular and the next big thing in model making, and this literally. The about four meter long Ford GT40 with starting number 1 and in the colors of sponsor Gulf Oil in this format is measuring 34 centimeters after all; as a model in 1:18 it would be 22, in 1:43 just nine centimeters. Modelcars in 1:12 thus offer more room in 1:12 to present the details of its technology more descriptively. And this is the option that GMP uses extraordinarily well for the GT40 built from diecast. On the one hand, the surface structure in the interior should be emphasized, which is very easily accessible to the eye thanks to the doors that have been extended by the cutout of the roof: Meager furnishings, but authentically reproduced in structure and color. Shift levers, scenery and the switches are real eye catchers. Including the leather loop for closing the door.

With which Christian Bale alias Ken Miles had his difficulties at the start in the feature film "Le Mans 66 - Against every chance". The focus of the movie, staged by James Mangold, is the competition between the two car manufactures Ferrari and ford about the supremacy at the 24 Hours of Le Mans in 1965 and 1966. A great movie: Henry Ford II - played by actor Travy Letts - overtook the family business of his grand father and wants to establish American cars in the market dominated by European manufacturers. After the idea of the young visionary Lee Iacocca (Jon Bernthal) and the failed sale of Ferrari to Ford, Iacocca brought the former Le Mans winner and engineer Carroll Shelby (Matt Damon) on board. With the Ford GT40 Mk. II they wanted to beat Ferrari at Le Mans. What the role model of our model succeeded in 1966 as a runner-up among three GT40s.

But we stay at the modelcars from GMP: After examining the interior, we come to the highlight, the engine. The mold engineers have made a real memorial to the 7.0 liter V8 in 1:12. From the intake funnel to the exhaust pipes, its components are authentically reproduced in different colors. Cables and lines are reproduced correctly, just as the hood is held in place by a chain. Have we seen a chain of this type in a blog in five years? We cannot remember. Hood closures, the grille panels for venting the engine compartment - the fans should hardly be able to detach themselves from this sight. Wheels and tires fascinate with their detailed profile and the central lock. There is a spare wheel and the tank under the front hood - all implemented in multiple colors!

The modelcars of the Ford GT40, used by the Shelby-American Inc., offer a perfection, which almost gives the impression that Caroll Shelby personally put his hand on these high end miniatures. Even the plexiglass window in the side glazing can be opened. That the appearance of the modelcars matches with those of the line management from the role model, we hardly have to mention anymore. Yes, it is a bit more expensive to have a special taste, but in the case of the models of the Ford GT40 in scale 1:12 from GMP, collectors should really think about whether they are going to get this strictly limited and fascinating rarity that will make our hearts glow and is available under item number M1201003. Some things you only treat yourself once in a lifetime!

Here: Click to all models of the Ford GT40