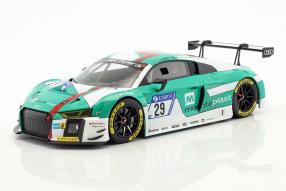 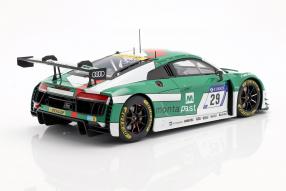 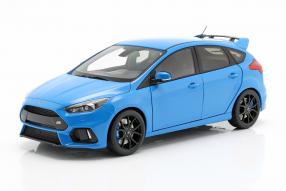 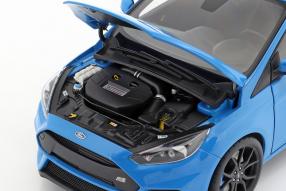 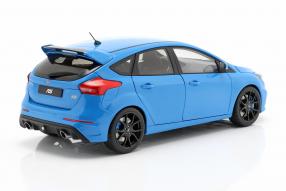 Autoart has delivered next to the Bugatti Vision GT also modelcars to the Ford Focus RS 2016 as well as to the Audi R8 LMS from 2017 this week. We already know the Focus in other color variants: Now it is the painting called nitrous blue, which the manufacturer offers under item number 72953. Currently you can find still the Ford Focus RS in the colors frosty white and shaddow black (72951, 72952) in our portfolio, which also have openable doors and hoods, as their very latest sister model. By the way, the sporty blue tone stands out extremely well, which reminds us of the comparable tones nogaro blue at Audi and miami blue at Porsche. The second modelcar in our current article is the Audi R8 LMS, whose model won the 24 Hours of the Nürburgring in 2017 and now appears again of diecast.

Again, because not for the first time: Exactly the same car was the corresponding miniature model, which Paragon Models has also brought in the scale 1:18 on the market; also made of die-cast zinc, but without functional parts. In contrast to the modelcars from Autoart - own spelling AUTOart - with the item number 81701 the doors to the R8 LMS remain closed at Paragon. That certainly has price advantages, because the first miniatures released cost about half of what Autoart calls for the winner of the 24 Hours of the Nürburgring 2017. And now to the team and vehicle itself: Wolfgang Land and his son Jochen founded the joint team Land Motorsport in 1995, which has been based on the Audi R8 LMS since 2016. Starting in 2015, the second generation of the R8 LMS was launched with this new vehicle in accordance with the regulations of the GT3 Group.

What has been crowned with success: powered by a 5.2-liter 10-cylinder V-arrangement with 430 kW / 585 hp model of the model number 29 has at the 24 Hours of the Nürburgring 2017 on the weekend of May 25th to 28th met the expectations set in it and won the race around the Nordschleife with the drivers Connor De Phillippi, Christopher Mies and Markus Winkelhock and Kelvin van der Linde after 158 laps. Their average speed was 166.784 kilometers per hour; the fastest - the 112th - lap was 181,301 km/h. If we now look at the modelcars from Autoart, so accelerates our pulse to similar values, as it must have been with the racing drivers driving through the carousel, because the exterior and interior of the small Audi R8 LMS offer a lot of value for money! The doors nestle excellently into the diecast environment; the interior does not forget any detail!

What also applies to the Ford Focus RS 2016: The role model belongs to the 3rd generation of this golf competitor and was presented in early March 2015 at the Geneva Motor Show. The market launch in Europe took place the following year. The Focus RS is powered by a 2.3-liter EcoBoost four-cylinder engine from the Ford Mustang. However, with the help of a new twin-scroll turbocharger with a larger intercooler, the power in the Focus RS is 257 kW / 350 hp. The maximum torque is 440 Newton meters (Nm), with overboost for 15 seconds 470 Nm. In addition, there was a so-called drift mode, which can distribute up to 100 percent of the force on the rear axle (70 percent) to the outside wheel so as to allow easy drifts of only available as a five-door four-wheeler, whose production was discontinued in 2018, as the successor began.

Click here to the modelcars of the Ford Focus RS 2016