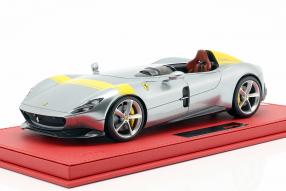 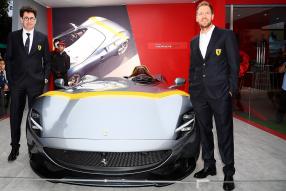 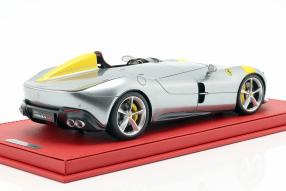 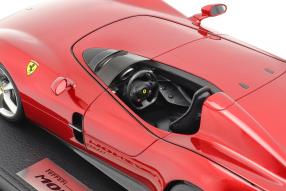 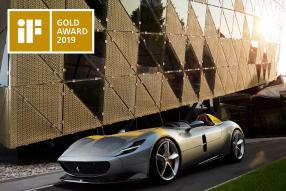 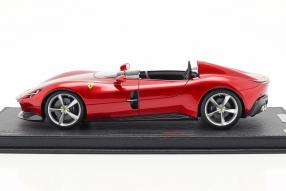 There is an assertion that we can st up for our esteemed readership, which certainly no one contradicts. The assertion is: A car from Ferrari is always an exclusive thing! Does anyone object? Probably not, because the expansive sports cars from Maranello enjoy legend status and have been designed from the beginning of their production - the company was founded in 1947 - in quantity and price for a wealthy audience. However, the new modelcars of the Ferrari Monza SP1, which BBRmodels delivered in a scale of 1:18, are proof that this is still a bit more exclusive. The miniatures are the first car of the so-called Icona series. In this series Ferrari builds cars that are reminiscent of classics from the program and are produced in low quantities. The role model costs around 1.7 million euros.

The trade press has overturned and has showered prizes on the Monza SP1 and SP2: In January 2019, the series, first shown in September 2018 in Maranello and a month later at the Paris Motor Show, was honored as "Most Beautiful Supercar of the World". In March 2019, the SP1 won the iF Design Award in gold. The popular design award Red Dot won the vehicle with the addition of "Best of the Best". Ferrari explained to the audience, who was present at the unveiling of the SP1 on the occasion of the Australian GP 2019 by the Ferrari team boss Mattia Binotto and Sebastian Vettel, the idea: The Ferrari Monza SP1 is the pioneer of a new concept called Icona, with which the meeting of advanced technology and exceptional tradition is arranged as only Ferrari can offer.

In the Monza SP1, Ferrari reinterprets a timeless, state-of-the-art style, with technologically advanced components and the highest performance resulting from constant innovation. The Ferrari Monza SP1 is inspired by the Barchettas of the 1950s; Like the SP2, it is a reminder of the Ferrari 750 Monza, Ferrari 860 Monza and Ferrari 166 MM. With the 166 MM, Ferrari won both the Mille Miglia and the 24 Hours of Le Mans in 1949. The numbers in SP1 and SP2 tell you whether the Monza is a one- or two-seater. The cars are reminiscent of the appearance of the Mercedes-Benz SLR McLaren Stirling Moss from 2009 and own like this also as a roll bar serving airdomes behind the seats. Like the SLR, the SP1 and SP2 waive a windshield. The doors are designed as scissor doors. It really is a "pure car", which we encounter with the super sports cars.

Technically, the 4.7-meter-long Monza SP1 and Monza SP2 are based on the 2017 introduced Ferrari 812 Superfast. This means: V12 twelve-cylinder with 6.5 liters of displacement, installed front longitudinally, passing on the rear-wheel drive 719 Newton meters (Nm) maximum torque, which is obtained from 596 kW / 810 hp. From zero to 100 km/h, both versions accelerate in 2.9 seconds; in 7.9 seconds, they are at tempo 200. By the way, switched by seven-speed dual clutch transmission. The peak is more than 300 kilometers per hour. Mega, right? The modelcars with the item numbers P18164A in the color combination silver / yellow are limited to 440 units; the magma red version on 240 pieces (P18164B). The miniatures are made of high quality resin plastic in perfection, as we know them from BBRmodels otherwise.