The model car manufacturers continue to expand their programs on a massive scale at a breathtaking pace. Here is the latest work from GT-Spirit 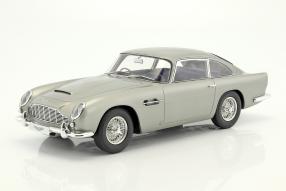 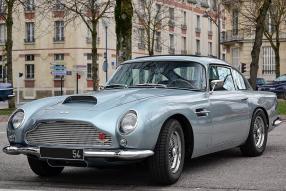 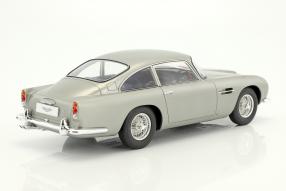 Would the Aston Martin DB5 have become the icon of sports car construction if there had not been a man named James Bond? We do not know. But we know and love the appearances of the British car who was first presented in 1963 in the films, which were created after the stories of Ian Fleming. Whether in "Goldfinger" or "Fireball" - the DB5 saved his hero from many brutal situations and celebrated about 30 years later its comeback. While the car in "Skyfall" was badly played with, it was at the end of "Specter" to see again in old splendor. The model car introduced by GT-Spirit under the article number GT765 does not have Gadgets like the DB5 in the James Bond films, but nevertheless the miniature is also interesting for the lovers of the movies, because though its presence in the format 1:12 its details are staged in a special way.

But before we turn to the model, just take a look at the prototype. The Aston Martin DB5 celebrated as mentioned in 1963 his debut and comes out as a miniature under the model year 1964. The heart of a six-cylinder in-line engine with a displacement of just under 4.0 liters beats under the attractive bonnet. In the basic version, it transmits 210 kW / 286 hp via the ZF five-speed gearbox to the rear-wheel drive. Its maximum torque of 390 Newton-meters (Nm) helps to accelerate the car to 100 km / h in 7.1 seconds and reach a top speed of 229 km / h. GT-Spirit made the model car from high quality resin plastic; Doors and hoods remain closed, but that's not bad. You want to know why?

Quite simply because the car fascinates with its incredibly well presented details. There is the grille with the filigree bars to mention, which immediately catches the eye. Absolutely wonderful, however, are the replicas of the spoke rims, considering them, we cannot stop our amazement. The fine chrome trim and the door handles, the beautiful narrated fittings and seats - and all this looks impressive, because the model with its external length of 38 centimeters reproduces these details particularly pronounced. In comparison: In 1:18, the Aston Martin would be only 25 inches long. The new size delivers with the DB5 a new star with the DB5, which gives off a very good figure with its harmonious appearance and perfectly reproduced lines not only in the showcase of car fans, but also of movie fans.