The F26 comes after the 1: 43er edition of Herpa now also in the so-called Bburago scale. We look at the model car a little more closely. 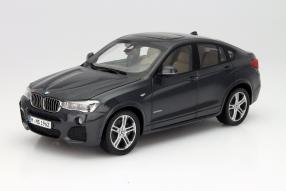 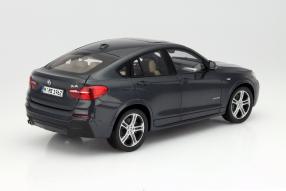 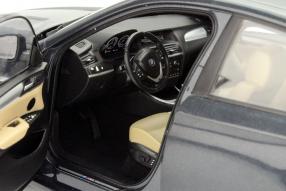 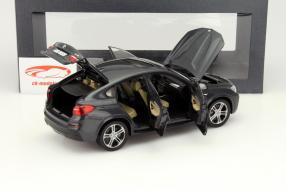 Sophisto Grey Metallic,  quite the melodious name of a painting, of the new  BMW X4 in scale 1:18  . Under the item number 80432352461  the carmaker and the model car label present a miniature that convinces at first sight with its finish. With perfectly implemented interior , a detailed engine compartment, steerable front wheels and opening engine bonnet and functioning doors plus the trunk lid all for 79,95 euro. Starting with the BMW kidney at the front, we  immediately notice how much effort  the mold makers at  Paragon Models put in with the X4 internally called F26: Technically not to beat in finish.

The model car of BMW X4 in detail


Let our eyey wander over the body , we see little to minimum gap dimensions and a successful quality finish. The doors of the X4  fit almost perfectly into an environment of die-cast zinc body. In contrast to the model of the new Audi Q7 car from Minichamps - on which we have reported in the article that can be accessed via this link -  Paragon also has  open access in the rear. In a model of this size, it's a bit dumb, that  for reasons of cost they save at the opening rear doors. BMW is more generous than Audi and equipped the new X4-all around with functioning accesses and makes at least  our model car heart jump. Yours as  well? The roof is equipped with the reduction of a glass sunroof. The door handles are separate components. The headlights were rebuilt perfectly .

Thorough work in the body


For the presentation of the   wheels BMW and Paragon chose the 18-inch double-spoke 605 from the carmakers program. Exterior mirror housings and the small antenna on the roof are rebuilt exactly in shape and look; over all  the model car corresponds in appearance exactly to the design of its prototype. A very good fit in the body is also shown the far opening tailgate. Taillights units and rear fog lamps in the rear bumper fit without effort . Which also applies to the glazing of the cabin. That the interior has an elaborately decorated and formally coherent dashboard, just such seats and thoroughly modeled side panels, must also be mentioned at this point . Great are also the pedals and flocking the passenger base and depth and detail of the model engine.


The BMW X4 is available from 46,400 euros in the price lists of the car manufacturer. The vehicle belongs to the genre of so-called crossover SUV,  trying to cross an SUV with a coupe. The Bavarians laid the foundation for this category with the X6 ; Mercedes-Benz recently presented  the GLE Coupé. BMW calls this type of vehicle  SAC, Sports Activity Coupé. The BMW X4 shares the base with its sister model X3, but wins by 14 millimeters and 36 millimeters prolonged lowered body of sportiness and dynamism in appearance.