The miniatures following the prototypes of Cal Crutchlow, Valentino Rossi and Marc Márquez are characterized by great technical details. 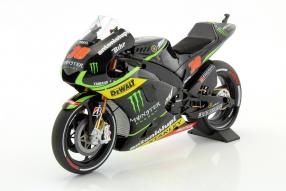 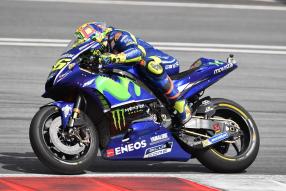 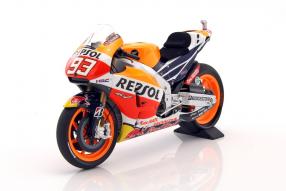 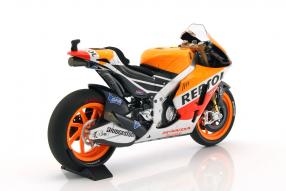 We have already pointed it out: A whole hot weekend of motorsport is on: in Belgium the Formula 1 returns from the summer break; In England, the 12th round of the MotoGP World MotoGP will be launched. The motorbikes also take up considerably in the program of Minichamps, the Aachener present more and more models. Let's take a look: The Yamaha YZR-M1 in the form, as Minichamps presents it with the models 122143038 and 122143146, were the operational vehicles of Bradley Smith and Valentino Rossi with the MotoGP 2014. The team around Paul G., Romy And Maximilian Lang has limited the wheels of the Monster Yamaha Tech 3 and Movistar Yamaha MotoGP to 240 and 1,152 copies respectively. What impresses us with the models is quickly enumerated.

The motorcycle models viewed in detail

The technology of the models on the one hand becomes more tangible, because the engine, chain drive and the chassis with all its details around damping and braking system a tick more prominently in the foreground than with the cars. Even with the Formula 1 mini-engines, we have not much of the engine; Only the chassis constructions are shown in all details. Drive and electrics slumber under the linings. The mold makers of Minichamps have met perfectly the appearance of the front panels, tank and seats of the models. The Aacheners supply the zinc die casting models from Smith and Rossi in 1:12 scale; Perfectly suited to the new miniatures of Porsche 911 930 Turbo 1977 or the Porsche 935 in civil and motor sport design.

Key features of the Yamaha YZR-M1

The Yamaha YZR-M1 is a racing motorcycle, which has been used since 2002 in the MotoGP class, the highest prototype category of the FIM motorcycle road world championship. The motorbike, developed by Yamaha Racing, derives its power from a four-cylinder engine with a displacement of one liter, delivering about 176 kW / 240 hp. Switching is done with six gears. Front and rear the YZR-M1 rolls on 17 inch measuring magnesium rims. Brembo is a supplier of brakes. The motorcycle weighs about 157 kilograms with its aluminum chassis. In 2004, 2005, 2008 and 2009 Valentino Rossi won the World Championship. In the years 2010, 2012 and 2015, Jorge Lorenzo was at the top of the podium thanks to the YZR-M1. The picture in our article is from Yamaha Racing and shows Rossi on this year's edition.

Before the race at the Silverstone Circuit in the UK, Valentino Rossi is fourth with 141 points. The table of the driver's rating is led by Marc Márquez, who is on the Honda product for the Repsol team, the Honda RC213V. To this combination we have the models to the models from 2015 and 2014 under the item numbers 122151193 and 122141193 offer. Let's take a look at the current main catalog of Minichamps, we note that this year, some new features on the wheels of the 2016 MotoGP as well as the drivers Nicky Hayden, Andrea Dovizioso, Márquez and Rossi, Dani Pedrosa or Cal Crutchlow, Stefan Bradl And Jorge Lorenzo will follow. Minichamps is the right choice, but it also delivers the same high-quality finish we know from race cars and road cars. We wish you a lot of fun while watching in Spa-Francorchamps or Silverstone.