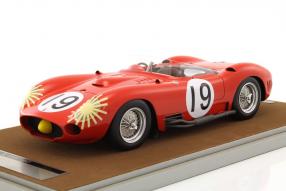 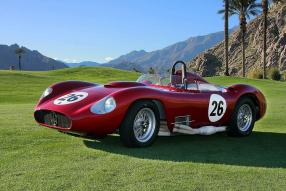 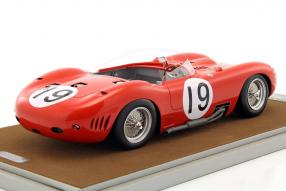 Maserati is no longer involved in the long-distance World Championship WEC at the factory, but under the aegis of Ferrari with luxury limousines such as the Quattroporte, Coupés and the SUV Levante has experienced a terrific comeback in recent years. However, the traditional care in the form of the licensing of Modellautos is no less pronounced, as with the employer of Sebastian Vettel and Kimi Raikkonen. The small series label Tecnomodel has accepted the reduction in the size of the Maserati 450S, which was exactly 60 years in the sports car world championship. There are four impressive model cars in the 1:18 format, all built on the same basic pattern, but they are able to tell you about different racing events and racetracks. As usual with Tecnomodel, they are made of Resine plastic and limited to a very limited, exclusive number of pieces.

The basic data for the Maserati 450S

The Maserati 450 Sport has been developed in order not to fall behind the competition against the competitor Ferrari. After all, both of them served the segment of high-class road racing cars - a lasting after-riding on the track was not a good basis for success in sales. Its engine, equipped with a displacement of 4.5 liters, produced 294 kW / 400 hp and was initially subject to strong vibrations. Nevertheless, in the second race, the 12 hours of Sebring 1957, the drivers Jean Behra and Juan Manuel Fangio with the number 19 got the first victory for the workman. Tecnomodel dedicates the model car with the article number TM18-45C, which has appeared in an edition of 120 copies.

At the Mille Miglia in 1957 it ran after less. After twelve kilometers the Bremspedal broke and Stirling Moss had to stop the car. The Officine Alfieri Maserati and their riders Moss and Denis Jenkinson had this evening, but Tecnomodel with the 50 units limited Maserati 450S in 1:18 scale and with the starting number 537 a great Modellauto (TM18-45D). The driver pairing Moss and Fangio fell at the 1000 kilometer race on the north loop of the Nürburgring on May 25, 1957, which does not detract from the attractiveness of the model car with the starting number 1, of which Tecnomodel made almost 50 (TM18-45B). With the road version, the so-called Presseauto (TM18-45E, 60 copies), the small series lables round off the offer.