One day after the 85th edition of the 24 hour race new model cars arrive whos prototypes came into play a year ago. 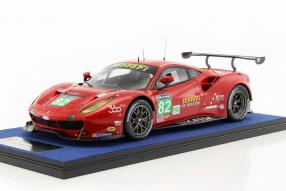 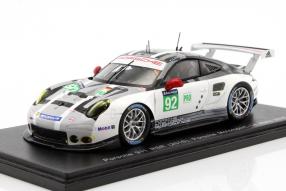 Le Mans won't let us go: One day after the thrilling race, and the fortunate victory for Porsche, new model cars arrive, which refer to the 84th edition, the last years edition of the long distance race at the Sarthe. However, it is not a miniature of the class LMP1, but of the classes created below. The Giancarlo Fisichella, Toni Vilander and Matteo Malucelli, who competed in the LMGT-Pro class for the Team Risi Competizione with the number 82 in the Ferrari 488 GTE, will be ranked 19th in the overall ranking after 340 rounds , The model car in Look & Feel exactly corresponds to its model and is delivered in a noble showcase.

This also applies to the identical AF Corse field car, where Gianmaria Bruni, Alessandro Pier Guidi and James Calado were driven by 179 laps, but they did not see the target flag because of their failure. In the race, which was initiated by actor Brad Pitt, 263,500 spectators were actively involved in 60 vehicles; Winner was also the team Porsche with the starting number 2. A familiar year ago? Porsche drivers, Patrick Pilet, Kevin Estre and Nick Tandy, also entered the grid for Porsche North America with a 911 RSR under the starting number 91, also in the LMGT-Pro class, which also turned out to be the same after 135 rounds The sister car with the number 92 and the drivers Frédéric Makowiecki, Jörg Bergmeister and the New Zealander and this year's LMP1 winner Earl Bamber.

The attractiveness of the models to the two cars rated in the seats 58 and 57 does not stop, as Spark, as usual, has done nothing but humanity in the appearance and the decoration, to offer the collectors first-class miniatures. The fans of Chevrolet can also look forward to it, because the team around Hugo Ripert, the handy, cleanly made miniatures in the scale 1:43 delivers to the Corvette C7.R. Thus, the fans of the 24 Hours of Le Mans can come a step further in their efforts to fill the starter field of the previous year. To the Toyota TS050 Spark, by the way, currently supplies the winner of the 6h 2016 from Fuji; Also in the size 1:43 and more durable, as a model. ;-)