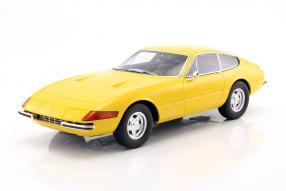 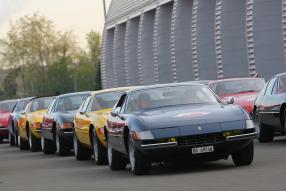 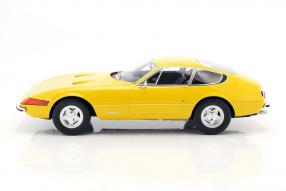 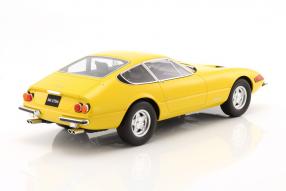 It was counted as a symbol of a men's car,the Ferrari 365 GTB with the never-factory-nicknamed Daytona. Thus the specialist magazine "auto, motor und sport" is cited in connection with the sports car built between 1969 and 1973, to which the two cooperating modellautohändler modelissimo and ck-modelcars last Wednesday presented a yellow painted grand act: the miniature In a 1:12 scale measures 37 cm in length and thus surpasses a model in the so-called Bburago-size 1:18 with its approximately 25 centimeters by the length of a miniature in 1:43, namely by about twelve centimeters. Like no other model, the Ferrari 365 GTB is suitable as an ornament for a desk or living room.

Alone in itself, the design unfolds its effect almost better than if it is surrounded by other models. The manufacturer of this impressive jewel is the small series label GT-Spirit, which is known for high quality with its resin-made cars. Due to the use of the polyurethane casting resin, which places less demands on mold making, the production of a small series limited to only 300 copies is only economically possible. Only hook: Doors and hoods of the front-wheel motor sports car remain closed. In this case, it means that we can not look at the V12 cylinder engine, which pulls out of its 4.4 liters displacement 259 kW / 352 hp and still based on the drive set of the predecessor 275 GTB. 449 newtonmeter (Nm) torque are available at 5,400 revolutions.

When switched to a five-speed gearbox in Transaxle design (front engine, rear switchbox), the power pack delivers a single-wheel-drive coupé to a top speed of 280 kilometers per hour; In 5.4 seconds the car reaches 100 hours of kilometers. Our model car can only keep up with the fact that it is able to accelerate the heart rate of the viewer at similar speed, because the details like the perfectly replicated underbody and the processing quality of the attachments know how to inspire. The look and feel of the model is all the same: the look and the lines are without the touch of an approach to criticism with the legendary model. The front air intake, the chrome push rods and the engravings of the folding lamps are top!

The chrome frames around the glazing as well as the four meticulously replicated taillights with the filigree ornamental rings are also high-quality. The four exhaust tailpipes in chrome as well as the black rubber ribs on the bumper round off the successful and characteristic butt. The interior: black and puristic - the very child of his time. Tag: From April 4, 2008 comes the beautiful photo with the almost 20 Daytonas, which Ferrari gathered for the 40th birthday of the sports car in Maranello. The 365 GTB has the nickname because of the legendary triple gain of the Prancing Horse at the 24 hours of Daytona in 1967. The cars on the photo - anger from Europe, the USA and Africa - recalled the race of the 300 kilometer Circuito delle tre province "On which Enzo Ferrari finished his last race as a driver.