On Monday after the 24h race of the Nürburgring 2017, a lot of model cars of the previous year&#039;s event arrived. 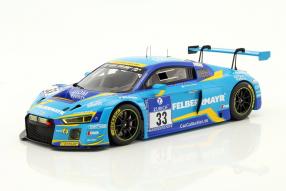 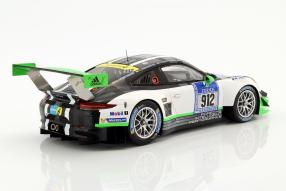 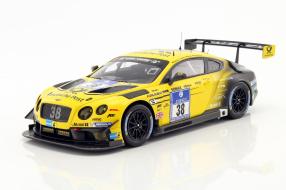 Many fans of our Model cars also ask through Twitter at what time do miniatures of the current models from current racing series appear. One can say roughly one year after the event. For example, Spark Models, the company specializing in motorsports, now presented the model cars for racing cars, which took place at the 24h Nürburgring 2016, the 44th edition of the Traditionsevents, exactly one year after their deployment. The work of the model launcher on the new Formula 1 cars 2017 started with the first run of the season; With the miniatures is to be expected in the late autumn. But first of all back to the innovations from Spark, which include models for the Audi R8, the Porsche 911, the Chevrolet Corvette and the serie winner Mercedes-AMG GT3 and are held in 1:18 scale.

The Audi R8 LMS with the starting number 33 is now available in the Spark range, with the Audi R8 LMS, whose model was used by Team Car Collection Motorsport with drivers Andreas Ziegler, G. Tonic, Ronnie Saurenmann and Peter Schmidt. Like most other novelties, the model is limited to 300 copies. The race car drove as 18th in the overall score after 123 hours over the finish line of the 24 hours around the Nordschleife. One of the mega models is the Porsche 911 GT3 R of the 991 series, as the team Manthey Racing with the driving combination Richard Lietz, Jörg Bergmeister, Michael Christensen as well as Fred Makowiecki at the last year's duration. The Modellauto, like its colleagues, is characterized by the highest level of detail, even if the original has only done 100 laps.

More successful was the Bentley Team Abt, which, with the Bentley Continental GT3, took the seventh place in the overall ranking of the previous year. The complex modellauto also comes in an exemplary painting and overprints to the drivers Christopher Brück, Christian Menzel, Guy Smith and Fabian Hamprecht, who have driven the cars 131 laps around the ring and needed 24: 09: 49.685 hours. A true eyecatcher, this model car. But in addition to these beautiful cars, Spark delivered in the same finish to the 24 Hours of Le Mans in the 1:18 format, to which you can get a general overview. Looking at it anyway, our joy grows on the models of this year.