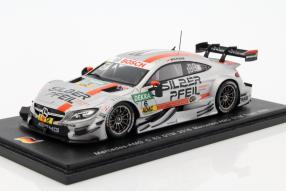 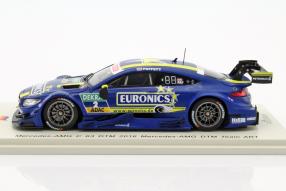 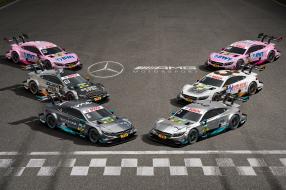 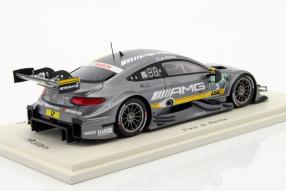 Just before the 3rd advent of the previous year, the fans of the DTM were able to get the model cars of the Mercedes-AMG 1:43 in the format 1:43, which Spark delivered in cooperation with the licensors to the branches of the brand with the star And of which we have secured a certain number for you. Now the small series label with the not so small product range delivers the miniatures with the packaging of the specialist trade program: the car of Paul di Resta of the Mercedes-AMG DTM Team HWA comes with a circulation of 300 pieces with the article number SG280 into the trade, the Mercedes -Benz AMG C63 DTM by Robert Wickens to the same extent (SG281) as well as Gary Paffett's car from the team Mercedes-AMG DTM Team ART (SG282). In the finish are all top. But what will change in optics in 2017?

The models from 2016 viewed in detail

As every year, Spark has invested in new molds, and the car bodies of the racing cars have been exactly fitted into the model: Messerscharf's signature bow trims, first-class splinters, meticulously replicated headlights, really perfect wheels, tires and brakes, knowledgeable reduced roll cages together with seats in the interior as well Rebuilt rear spoilers. These reveal how much fun the model builders of the team around Hugo Ripert must have had at work, so well, these details have succeeded. So no question: With the Mercedes-AMG C 63 DTM 2016 really cool models come home to you, the spark from Resine manufactures. In the DTM, the cars do not build on the car bodies of the production cars, but have a monocoque made of CFRP.

The wrapped-up sleeve looks like the Coupé C 205. Integrated into the monocoque are the 120 liter fuel tank and the roll cage made of steel. The 368 kW / 500 hp racing car from a V8-aspirated engine with a displacement of 4.0 liters relates to its propulsion; The maximum torque is 500 Nm (Nm). Despite the best conditions, it was only an optimal year for Mercedes-AMG in the Formula 1, because in the DTM, it was only 3rd place behind Audi and BMW. That is 2017 to run significantly different. The Mercedes-AMG Motorsport DTM team has devised six new vehicle designs for the DTM season 2017 in order to improve the visibility.

From the beginning of the motorsports season 2017, it is true that a uniform design appearance should connect all Mercedes-AMG Motorsport workstations, which has the same design elements, the so-called digital flow. This is clearly visible on all six new DTM racing cars on the side and covers the entire performance, on and off the track, the driver jumps, the team van, the box walls and much more. Team captain Gary Paffett and Robert Wickens each start in a silver- or anthracite-colored "Mercedes me" Mercedes-AMG C 63 DTM with a digital flow in petronas green on the sides of the car. Lucas Auer and newcomer Edoardo Mortara go on points hunting as "Pink Panther". We are already looking forward to the Advent season, when the 2017 models arrive to us. You too?