For friends of the automotive ingeneers of Stuttgart, it is really like a feast at the moment: numerous miniatures from different manufacturers are new in the trade. 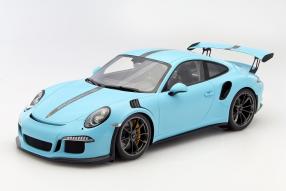 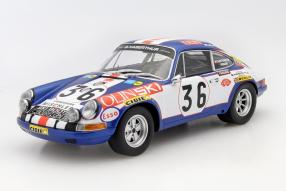 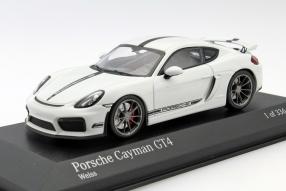 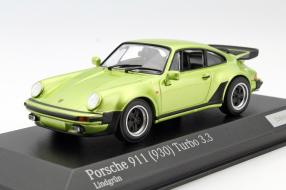 The new year is only 6 weeks young, but we still have the impression that it is almost time for the Christ child. Because at the moment so many horny modellautos on the Porsche come on the market, that the friends of the sports car manufacturer would actually have to make air jumps; Always at least when they learn about our innovations through our Facebook and Twitter presence. Let's begin with the very big number: Spark introduces the Porsche 911 GT3 RS 1:12 scale in the length measuring about 35 centimeter measuring model, which appeared in two colors right away. On the one hand, the coveted Lava Orange and the Olympiablau on the other: a hammer color, the look of which wins over the strip over the middle of the car with Porsche lettering.

We do not want to go into details here, such as the well-made details and the harmonious appearance; You know as a loyal reader anyway, that Spark is top. Much more we find that even people who do not have a model collection at home can present a great view with the large miniatures in the living room or office. It is a good thing that the models are delivered with showcases. In the 1:18 format, however, there is also plenty going on, as the historic car models, which recall glorious Porsche shows like the 24 Hours of Le Mans, attract more and more fans: Look at the Porsche 911 S, with the The team Écurie Jean Sage with the drivers Björn Waldegard and Bernard Cheneviere entered 1971 at the Sarthe - a hammer part in terms of decoration and interior.

Back to the Porsche 911 GT3 RS: As many of you can remember, Minichamps has produced one color after another in the 1:43 scale and has kindled a hype for the really successful model car. This is similar to the Porsche Cayman GT4, which was not only this year's measurement model in Nuremberg, but is currently debuting in numerous paint finishes. For us it is clear: Here is a new, comprehensive collection theme, to which we have compiled a comprehensive overview in the link embedded here. The fact that there is value growth, we are sure, because some of the colors are limited to 100 or 200 copies. Something that goes with Minichamps, not with Schuco. The Fürths offer the Cayman GT4 also, but behave in spite of the top quality somewhat lustier in the marketing.

GT-Spirit also serves the friends - as well as Schuco - with the Cayman GT4 in 1:18; Also included in the list. Competitor Herpa from Dietenhofen has launched the revised miniatures for the Coupe, Targa and Cabriolet to the Porsche 911/991 GTS on the market. The new miniatures of the Porsche 911 Turbo 3.0 and 3.3 of the 930 series from 1976 and 1978, and the Minichamps in the stunts of Oakgreen, Arrowblau, Lime Green and Vipergründiamantmetallic, are likely to develop into a true hit - also in terms of value Next to those in Talbot yellow and black; Partly also strictly limited with only 200 copies. Can you now and in the light of this flood of innovations understand why we are talking about Christmas for the friends of Porsche? A pure feast for the senses!