Since last summer it is known that the label of the Sums Inc. from Shanghai delivers model cars onto the market: It starts with a Bentley GT3. 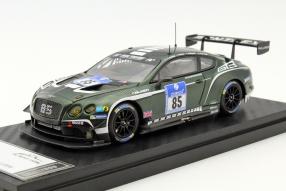 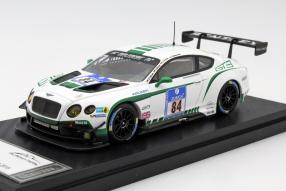 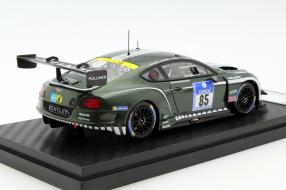 Before we return to the Toy Fair 2017 in Nuremberg, we would like to introduce you to the label Almost Real Models, which will debut with two miniatures for the Bentley Continental GT3 in 1:43. From the previously known car models to the prototypes from the motorsport of Spark, for example, this GT3 differs from being made not from Resine plastic, but from Diecast. This is also one of the reasons that we would like to look at these modellautos at this time. Almost at the first glance it becomes clear that the mold builders of Almost Real have perfectly adapted the model to the models; The licensor - the Bentley Motors Ltd. - should therefore be satisfied.

Good detailing right from the beginning

But not only the harmonious look is enough, but we also check the details. Just looking at the sill in the carbon look, we are well-disposed towards the assessment of the details. The tail end of the exhaust system, the structurally exact replica of the brake discs as well as the mounted handlebar handles rank in the ranking with the competition at the top of what we know from other manufacturers. The housings of the exterior mirrors and the guide of the air shafts fit: cuts against models of other labels are not noticeable. This applies to the telemetry antennas as well as to the expansion of the interior with the huge tubes of the overrunning bracket. The people at Almost Real have made a great deal of effort in the design of the bow aprons: everything is top!

The two miniatures for this article are in a qualitatively makellose manner the decoration of the vehicles, as they were in the 24-hour race at the Nürburgring or also ADAC Zurich 24h race in the middle of May 2015 in the employment were. The model, which is held in British Racing Green, is modeled after the cars of driver composition Guy Smith, Steven Kane, Andy Meyrick and Lance David Arnold; The model is limited to 999 units. From the white variant Almost Real produces only 333 copies: The drivers of the model were Jeroen Bleekemolen, Lance David Arnold, Christian Menzel and Christopher Brück. Arnold, by the way, many of you from the VOX automagazine "automobile" know. There, Also cars tested; Our test result for the Bentley from Almost Real coincides with a positive conclusion. We are looking forward to further miniatures from this source, which also advertises in the 1:18 range at the show novelties to Range Rover, Land Rover, Mercedes-Benz and McLaren.