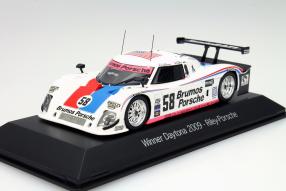 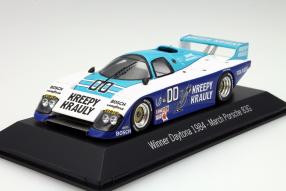 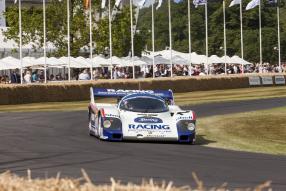 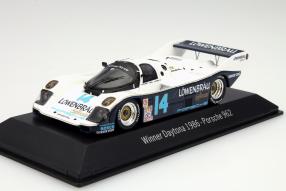 It was the summer of 1993, when the Earl of March publicly confessed his love ... stop! No, we don't want to tell  drama from the royal family of England but of  the founding of the  annual motorsport event Festival of Speed - short FoS - the event that brings motorsport fans and motorsport professionals to the grounds of Goodwood House in Westhampnett at Chichester in southern England . Organizer of the  ever increasing party is  motorsport enthusiast Charles Henry Gordon-Lennox, Earl of March and Kinrara, better known as Lord March. The place to be for motor sports enthusiasts is now also drawing attention  the automobile industry, which has already discovered their advertising effectiveness for themselves . Audi, for example, is starting with Nick Mason, the Pink Floyd drummer.


Right on time for the show which is open to race cars of all sorts  Spark is putting new cars on the fortunately rare models of Porsche. Porsche is a very large number in Goodwood, because the Festival of Speed is dedicated primarily to  cars that were previously found on the racing circuits and now  compete again. Even the drivers are back again ; racing heroes of the past who are all open  to giving autographs and fans. Since Porsche with the 911 and its derivatives identifies with the world of motorsport like no other brand, due to the history of the car as well as the 17 over all wins in Le Mans, the model cars match the story very well:   3 we picked out for you.


There is  the Riley-Porsche from  Brumos Racing that won the 24 hours of Daytona, driven by David Donohue, Antonio Garcia, Darren Law and Buddy Rice. Vehicles like this special built one  have  regular guest appearances at Goodwood and contribute to the charm of the FoS. Spark reduced the Riley-Porsche to 1:43 scale and provides the starting number 58 under item no MAP02030914 . Let's stay with the winners of the 24 Hours of Daytona and look forward to the March 83G Porsche with starting number 00 of Kreepy Krauly Racing who won the 1984 edition of the traditional race; available under item no MAP02028414. In 1986 it was the turn of Team Löwenbräu Holbert Racing, which put the drivers Al Holbert, Derek Bell and Al Unser junior  in their Porsche 962 .


A wise decision, which was rewarded with the fact that the team took the victory of the 24 Hours of Daytona. This model (MAP02028614) as well as the two other miniatures correspond in appearance and look exactly with the originals and are as usual ade from resine plastic and of excellent  quality by Spark. High class  prints and an interesting model-choice justify the price of 59.95 euros each. But now back to the Festival of Speed: This year, it is taking place from June  25th  to 28th   2015 .  As with the Formula 1 Grand Prix in Monaco ck-model cars is  live on site again. Because we love cars too. And we like the fact that  the Earl of March has become known for his passion for cars and the establishment of the Festival of speed. Whether  the Queen likes it or not. She is going to be in germany this week anyway.

[24.06.2015] Lamborghini Veneno by Kyosho and AutoArt in comparison