In time for the 17th Grand Prix of the year, Minichamps delivered the Mercedes-AMG F1 W06 Hamilton and Rosberg Japan 2015. In addition: O-Sounds for the coming race. 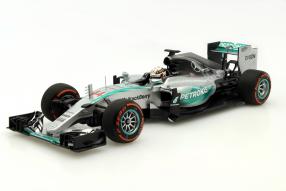 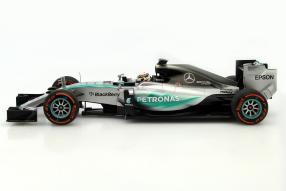 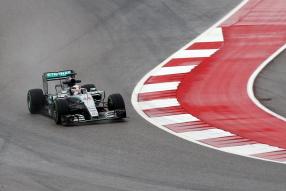 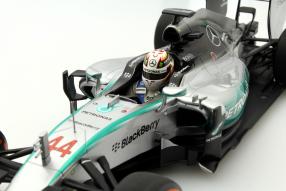 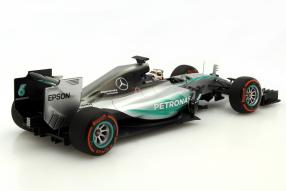 Slowly it is starting to get exciting in the Formula 1: Rosberg or Hamilton? All other drivers are five races behind of the seasons anyway and have no real chance for the title. Rosberg's lead over Hamilton has increased again with 288 points before 265 points. The audience in Japanese Suzuka is regarded as one of the most enthusiastic - motivation and motivation for the participants of Mercedes-AMG F1 in Formula One. Nico Rosberg in the tone: "I am here to win races. That is my goal every time." He runs consistently well, but he does not have the bite of a Lewis Hamilton. Hamilton has shown in Malaysia how flawlessly he can drive. Well, as long as the engine stops. Lewis before Suzuka: "I will use my inner strength to fight back."

Key facts about the race in Suzuka

Mercedes-Benz Motorsportchef Toto Wolff does not want to interfere in the races; A stableorder is not conceivable: "We will strike back together." Executive Director Paddy Lowe concludes with teeth-crunching that the cause of the engine damage - a crankshaft bearing damage - still has to be investigated: "Many drivers regard Suzuka as one of the most difficult driving route." The race on the 5.807 kilometer course runs over 307.573 km and 53 laps; It may well be that at the expected 15 to 23 degrees and 85 percent humidity rains. The rain probability is given as 70%. However, Japan is always worth a party: in Japan, Japan celebrated its 50th start in the F1, where in 2014 the silver arrows hit their 25th victory in the royal class.

Lots of nice occasions, to crown them with a fitting model car. The last year's W06 now appeared at Minichamps in the decors and the state of the art from Japan 2015: the model to the car of Lewis Hamilton under the item number 110150344 and limited to 504 copies. Also 1:18 Minichamps delivered the W06 hybrid from Nico Rosberg Japan 2015 (110150206). Both Modellautos are made of Diecast with the corresponding plastic components. Designer Aldo Costa has narrowed his nose against the predecessor and set lower the regulations accordingly. The resultant disturbances of the air flow at the front wing tried to avoid Mercedes with a very short nose, whereby the bow spoiler reaches far before the nasal tip - perfectly implemented by Minichamps.

Top job with the details

This also applies to the rear of the car, which is slimmer than the predecessor. The cooling system was optimized, in which the airbox and the air inlets were changed. As has often been the case, we have to emphasize that the filigree parts of today's Formula 1 replicate no label as well as Minichamps. The elaborate mold construction, however, to reduce the splitter and wind deflectors at the bow is worthwhile, as the view of the modellautos with the starting numbers 44 or 6 shows. The finish of the painting or the small telemetry antenna is a force. A great car in the model, a great driver pairing in the cockpit, because even the driver figures with helmet are included. We wish you lots of fun and a great, cozy autumn weekend.