TopSpeed debuts as a brand for high-quality model car in the field of sports cars. Also: Data and facts about the new super sports car. 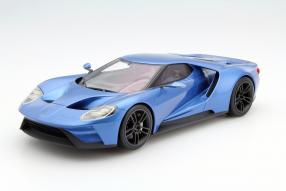 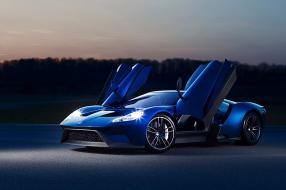 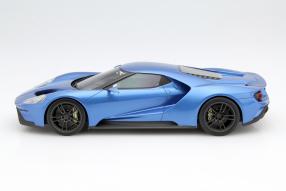 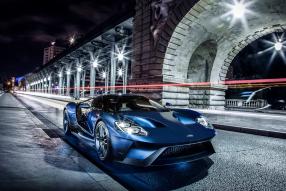 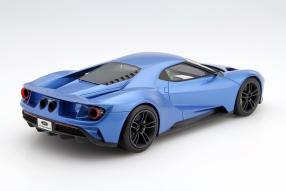 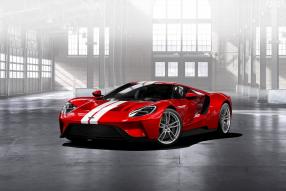 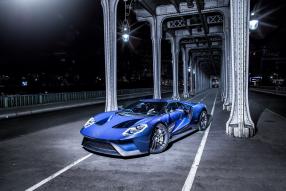 Could the label TopSpeed ??have search for a better prototype to launch in the market, as the brand new Ford GT? We believe: No. The attention that reap the model carmaker from Schaefer Avenue Chino, California with the new coupe would have been impossible to achieve with the McLaren likewise contained in the offer that. TopSpeed ??model is a new brand from the creators of TSM - also known as True Scale Miniatures - which are a household name for its particularly high quality car models for many years. This wanting to produce something cheaper that promises top speeds through the use of the latest 3D scanning technology, with the development costs can be reduced according to own data.

Yourself to devote thematically the heavyweights of the car market, which is the business model of TopSpeed. These include vehicles from Jaguar, Alfa Romeo, McLaren and even cars like the Ford GT. The appears limited to first 999 and 1:18 in the color Liquid Blue. While the model was constructed from carbon fiber composites, the model car resine plastic is produced. Doors and hoods remain, as in this material usual, unfortunately closed. Since the makers of TSM behind TopSpeed ??it is not surprising that the proportions and lines of the new model car exactly match the appearance of the model.

The perfection with which the mold engineers have transmitted the details of the GT on the model car, second to none. The razor-sharp traced design, the care when reducing the inner life of the headlights, the manner in which to insert the glazing and the rear lights into the environment from the polyurethane casting resin Resin, which is really great. Column and joints were executed correctly proportioned - a Topbenotung is inevitable since. Braking system, tires and wheels meet the rapidly growing after the first good impression, high expectations. Inside, the men and women of TopSpeed ??have proceeded exactly as thorough. Great, just great, like the Ford GT presented in the form of this model: note 1.

The model presented here car you can easily buy. When a model is not quite so simple. On the set up by Ford website www.FordGT.com underwent within the official deadline from 13 April to 12 May 2016 a total of 6,506 serious contenders from around 11,000 prospective global application process in which they were asked, among other things, a preferred Ford- to appoint distributors through which the purchase would then unwound - assuming the lady or the Lord would come into play. Hundreds prospective ranged in this context, a creative video to increase their chances of buying a Ford GT. Almost 200,000 fans have visited the online configurator.

Who makes the race for the Ford GT?

During the configurator all site visitors will still be available to the car of their dreams to have at least virtually become a reality, the deadline for purchasing the new Ford GT is, however, expired. Who will ultimately win the race? Ford called the new GT as one of the most exclusive production cars in the group's history, which will be built only 250 times a year. The now completed the application process related to the production of the first 2 years. Thus, it was only about a total number of 500 units worldwide. Loyalty Ford customers - Keyword: longstanding brand loyalty - and / or prospective customers who call already one or more Ford GT predecessor model their own, have better in the selection process maps.

The new Ford GT is at the forefront of the high-performance model range of Ford. The super sports car has an aerodynamically sophisticated carbon-fiber body and sets new standards in terms of lightweight construction and EcoBoost engine technology. With an output of more than 442 kW / 600 hp to be 3.5-liter six-cylinder biturbo engine is the strongest EcoBoost series aggregate at all. The power transmission to the rear wheels is handled by a seven-speed dual clutch transmission. . Ultramodern, particularly lightweight composite materials are used, so Ford Thus, for example, the safety cell, as well as the carbon fiber body; the front and rear frame structures are made of aluminum.

Ford revived with the new GT but also the brand history in motorsports new: Exactly 50 years after the legendary triple victory at the 24 Hours of Le Mans - the company in 1966 won by the Ford GT40 at the "Circuit des 24 Heures" - occurs Ford 4 racing copies of the new high-performance model on June 18 and 19 at the endurance classic on. In addition, Ford sends each 2 copies of the new Ford GT in the race of this year's FIA World Endurance Championship WEC (stretch World Championship WEC (World Endurance Championship) and the US IMSA WeatherTech SportsCar Championship. We wish to good luck and look forward to many great model car after this grandiose model; an ideal way to create a new collection.


Greetings from Asslar and a good start to the week to you all!