The news that the capital city has a new, prominent citizens, moved us to portray the model from Aachen in 1:43. 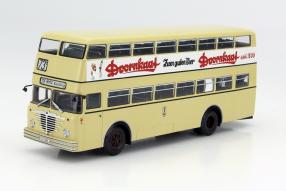 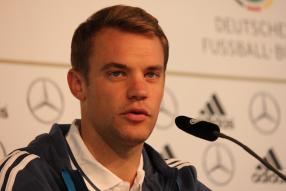 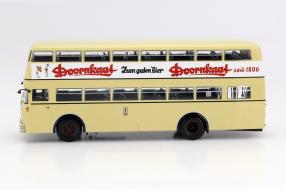 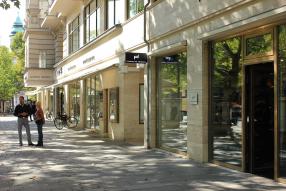 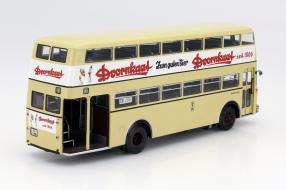 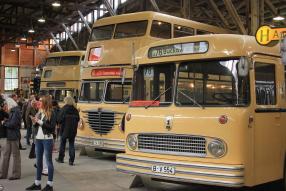 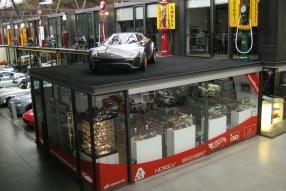 Yes, folks, Berlin is always worth the trip and for one or the other contemporaries even sexy enough to live there. Yesterday it was revealed that football star Manuel Neuer took over in March the key of his 300-square-meter apartment near the Kurfürstendamm boulevard. The 3 million euro country he should live with his girlfriend Nina Weiss. But whether he uses why one of the double-decker buses of the BVG? We think - no, he is not well. But with this message moved the model of Büssing D2U from Minichamps again in our focus, which is part of a 1:43 scale with the most delightful miniatures, who asked the Aachen on the wheels.

The limited edition of only 504 copies, available under the article number 439 071 085 and 144.95 euros guided in the price lists Model car draws the Friends of public transport very popular model in proportions and appearance after exactly. The painted here in beige model is reminiscent of the double-decker, which was delivered from 1951 to 1964 and is considered typical for the transport in West Berlin after the war. had the two-axle bus with underfloor engine on the right side behind the front axle due to the restriction of the height in Germany in the upper deck a low side aisle on the left side and four-benches. After assembly of the supervisor, the first open rear platform was closed with a four-part folding door from 1963rd

But this model is the variant of the outstanding platform on which the staircase was located to the upper deck. but to an accumulation of accidents, it did not come in time motoring. In the vernacular of the BVG personnel these buses were called Trampelwagen because the conductor had to leave due to lack of the solid conductor space by the car to the passengers. In 1978, the last D2U was retired. On special occasions, the car in good condition is with the vehicle number 1629 continue to be used by the Traditionsbus GmbH Berlin: For passenger transport on special trips, such as in the tradition of driving on October 31, 2015 to mark the 25th anniversary of the line 100th

Technical Details for prototype and model

Bus number 100 was established a few weeks after the reunification and leads from Alexanderplatz along many great attractions to the zoo. Minichamps has its bus still associated with the line 73, while no expense spared: The model consists of 120 individual parts with 250 decorations, including 157 Mask sprays, 33 Tampon prints and decals 9. Ah yes, the 51 Free sprays are also not to be forgotten. The Aachen have given much trouble, also correctly reproduce the details of the new model as with previous editions. 34 seats we count down, 21 standing places are given and 36 seats are in the upper deck. 930 D2U total built.

With the model in Doornkaat advertising there are 504 more. As a builder of the model the transport operator BVG (West) are referred to; Manufacturers were bussing for the chassis and the trader DWM, Gaubschat and Orenstein & Koppel for building. The power of the engine Bussing U10 is specified with 110 kW / 150 PS; his capacity includes stately 9,850 cubic. The gear: Until 1955 (up to 1199 cars and cars Additional 1252nd) unsynchroniertes 5-speed manual transmission (ZF), from 1956 Voith Diwabus gear 200S with 2 gears (automatic), the Traditionsbus GmbH. was slowed with pneumatic-hydraulic, 2 circles, hand brake mechanically to a brake drum on the drive shaft.

The maximum speed  is 77 kilometers per hour quantified (manual); with the automatic it 72 kilometers per hour. In the length of Büssing D2U has measured 10.40 meters in width and 2.5 meters of height whose 3,989. The empty weight was between 9500-9660 kilogram, which GVW totaled 15500-15700 kilograms. Or is because it is in the specimens obtained today. Those who wish to purchase the model that can, as always, in the online shop or in the shop of ck-model cars in the Classic Remise Berlin. The well-stocked shop in the complex at the Wiebestraße 36-37 model car to Büssing D2U is available. And what else in common even with the Berlin store? As Berlin he is always worth a visit.

The Jim Clark Revival is an exceptional vintage motorsport event with spectacular historic touring cars, prototypes and formula racing at the Hockenheimring in Baden-Württemberg. Visit us there from 15 to 17 April 2016! And: We are now on Twitter: https://twitter.com/CkModelcars