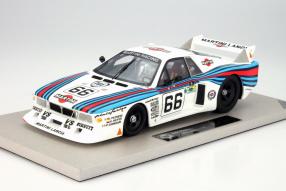 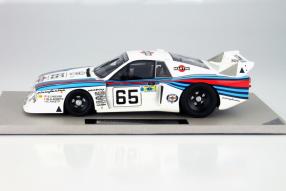 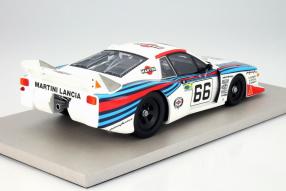 The 83rd edition of the 24-hour race at Le Mans - the 83e Grand Prix d'Endurance les 24 Heures du Mans - was scheduled for the weekend of 13 and 14 June 2015 in the international racing calendar. On the exact same date in 1981 the role models for the two models made by TopMarques  started, among others, at the Circuit des 24 Heures. The Lancia Beta Montecarlo Turbo in scale 1:18 which was driven by Michele Alboreto, Eddie Cheever and Carlo Facetti as well as  Riccardo Patrese, Hans Heyer and Piercarlo Ghinzani from the Martini Racing Team.
The two racers met the then group 5 and took advantage of the regulations according to the chassis of the series coupes; The two-seater coupe Lancia Beta Monte Carlo was introduced to the market in 1975 , promised to be  fun to drive, but still found no buyers and disappeared from the showrooms  in 1978. At the beginning of the 1980s, however, the Lancia-makers needed a new basic vehicle for motorsports. For the already emerging  Group 5 regulations only the Montecarlo seemed suitable , which  produced  a temporary rebirth of the S2.


8th place for a Montecarlo


At the 24 Hours of Le Mans in 1981, it didnt go so well for the, limited edition of 250, models of two of Top Marques. The lancia Montecarlo Turbo  driven by Alboreto, Cheever and Facetti  , starting number 65,  equipped with Pirelli wheels came in 8th place  after 322 laps. The team Patrese, Heyer and Ghinzani with the starting number 66 had to quit the race after  186 laps. Jacky Ickx and Derek Bell driving the Porsche 936 were first to cross the finish line. But the race result does not smaller the quality of the  resine plastic small series of miniatures.


The modelcar makers met perfect proportions of the model stretched by the spoilers in front and rear; the Martini Racing car looks exactly like its role model.  The still-present colors of Martini were met exactly; as well as the appearance of numerous stickers of sponsors. Doors and hoods are closed - the usual practice for models from the polyurethane casting resin. The starting number 65 is  available under item no TOP21A; the car of Patrese, Heyer and Ghinzani is listed under item no TOP21B. Both miniatures are each available for 199,95 Euro.