With the Porsche 997 from IMSA Performance Matmut and Team Felbermayr Proton, the team from Achen presents look back at Le Mans 2010 in 1:43. 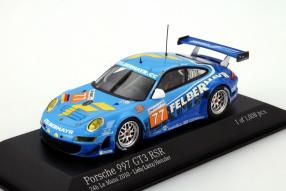 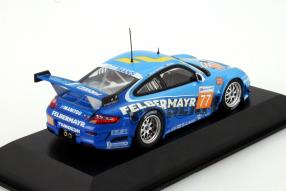 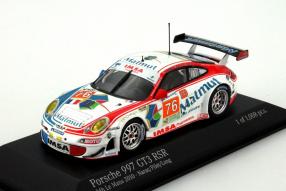 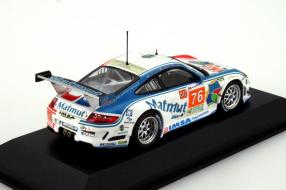 Racecar models are also always something like a look back to the expieriences the drivers  had  on the tracks around the world. To "survive" the 24 Hours of Le Mans,  is seen as an heroic act behind the wheel. Minichamps has brougt out the two Porsche models  997 GT3 RSR cars in  1:43 scale, which finished   the marathon at the Sarthe in 2010 as 17th  and 11th  in the overall rankings; the Porsche of Team Felbermayr Proton 11th  after 338 laps and also winner of the LMGT2 class.

The model cars of Matmut and Felbermayr are now available under the product numbers 410106976 and 410106977  for 64.95 euros each. What does Minichamps offer for your money? First of all car models - as might be expected - perfectly fit into detailing and appearance, proportions, and look to the respective performance of their models. Unlike competitors Spark, Minichamps remains with the Porsche race car 1:43 scale in die-cast zinc. The two miniatures belong to the so-called Le Mans Collection of the company based in Aachen/Germany and are each limited to 1,008 pieces.
The effort, that the team  around Paul G. and Romy Lang, shows for the 911 around Le Mans is enormous: The Porsche 997 GT3 RSR  by Felbermayr Proton -  with the start number 77 - consists of 72 Parts with 159 Decorations:  75 pad prints, 45 Mask sprays, 16 Decals and 23 Free sprays. The prototype was driven by the Germans Marc Lieb and Wolf Henzler and Richard Lietz from Austria, who are emotionally very attached to the vehicles from Zuffenhausen: Henzler has benn a factory driver for Porsche since 2008; Lieb drove the new Porsche 919 hybrid in 2014 in Le Mans into 11th place.


Minichamps was similar constructive with their Porsche of IMSA Performance Matmut with the starting number 76 .The 72 Parts had a total of 146 decorations.  After 332 laps the two Frenchmen Raymond Narac and Patrick Pilet and the American Patrick Long  finished the  Le Mans Race 17th place in 2010  . Both Porsche were on tires by Michelin, which  Minichamps  - known for their perfection-has correctly implemented.  Without showing the, of course: The 4.0-liter six-cylinder Boxer contributed 7.800 / min 331 kW / 450 hp in 2010


Pole position for Peugeot / next race in June 2016


Starting from pole position, with starting number 2, the Peugeot 908 HDi FAP, its sister model with the number 4 and 3: 19.074 also drove the fastest race lap. The 24 Hours of Le Mans and the Monaco Grand Prix Formula 1  together with the 500 miles of Indianapolis are known to be one of the 3 crowns (Grand Slam) of automobile racing. The 83rd edition of the 24-hour race at Le Mans - the 83e Grand Prix d'Endurance les 24 Heures du Mans - will take place fromJune 13th to 14th   2015 at the Circuit des 24 Heures. We don't know the outcome yet but what we do know is there will be new born heroes.