Two sport station wagons of the extreme kind in scale 1:18 by GT-Spirit 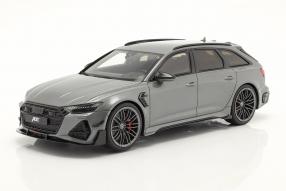 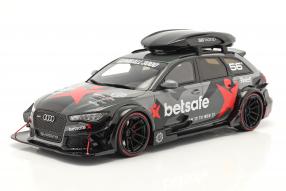 Audi is well known for top-class sport station wagons for numerous years. Those who wish to have more power than the normal A6 Avant decide to go with the S6. For those who still want a bit more, decide to go with the top model RS6. The two RS6 by GT-Spirit, however, are even a step higher than this top model and both passed through the hands of other tuners outside the halls in Ingolstadt. The Audi RS6 Avant model year 2020 in grey metallic in 1:18 replicates the role model, which was refined by Audi-tuner Abt in Kempten and is limited to 2,100 pieces. With the Audi RS6 C7 Avant DTM from 2015 in camouflage optics, GT-Spirit presents the absolute final boss in terms of Audi RS6 tuning. This model is limited to a number of 4,000 pieces. Both models are produced from the very high quality resin.

Audi-tuner Abt describes its RS6, which has been refined in 2020, as uncompromising and brutal. Not only the optics were modified at Abt in Kempten, in which the RS6 got different front and rear bumpers, also a powerful diffuser at the rear and a changed spoiler show that Abt is serious. Thanks to Abt, another 140 hp and 120 Nm are joined to the 600 hp and 800 Nm with which the RS6 gets deliverd by Audi. The family carriage of a different kind now sprints from 0 to 100 kph in just 3.2 seconds.

The RS6 C7 Avant DTM, built in 2015, defies every superlative with its appearance and its driving performance. In 2019, the car, which originally belonged to the Swedish pro freestyle skier Jon Olsson, was considered the most powerful Audi RS6 in the world. Its extreme diffuser at the rear, the paintwork in camouflage optics and the many carbon add-on parts made for an absolutely unique look. The Swedish tuning company Stertman Motorsport and ex-Koenigsegg developer Leif Tufvesson also lent a hand and helped the RS6 with racing fuel and an extreme turbocharger conversion to 1,000 hp. In addition to the sports exhaust and the brake system, other parts were specially designed for the rebuild. After Olsson took part in the Gumball 3000 race with the car, he sold the car to a dealer in Amsterdam. There the car was stolen in 2019 and unfortunately found burning in a parking garage a little bit later. With the GT-Spirit model, however, you can bring home a souvenir of this extraordinary hp-monster. 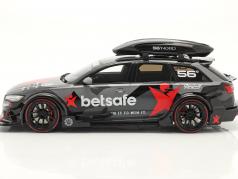 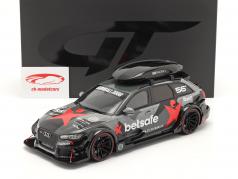 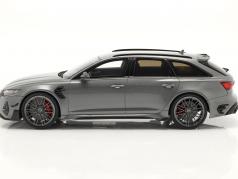 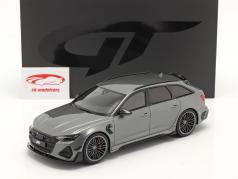