The new compact class and the Twingo appear in 1:43 scale and surprise: Since a long time advertising models of this quality weren&#039;t so inexpensive. 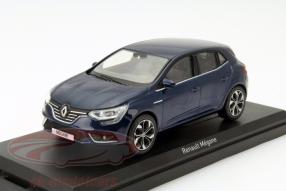 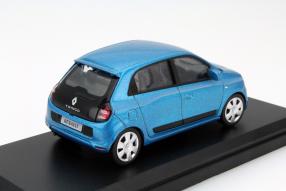 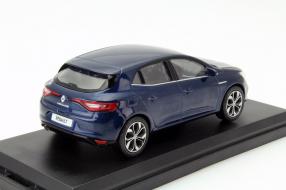 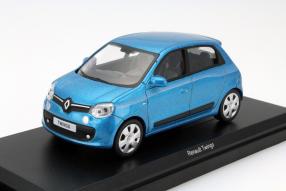 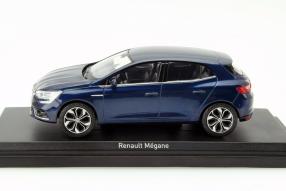 The French have a hard time in these difficult days. But is something that will help them get back into everyday life: Never give up, a characteristic the Grande Nation has and not just since the days of the French Revolution. One characteristic shared by the carmakers: The Talisman Renault launches just the renewed attempt to successfully establish a new middle class and transmits the progressive design directly on the model Mégane.

The compact class Renault has never been So extroverts, like the new sedan now presents itself. Whether the costomers will like the new design? We will see, but first note again that the model carmaker Norev has taken the lines of the four-door perfectly; including the chubby cheeks on the rear fenders that are further exhibited than the previous.

Renault calls this sporty, a coupe-like silhouette looks, a balanced proportions, sculpturally shaped surfaces, athletic shoulders. To lend a distinct character to the car, Renault came up with a unique light signature: "The up in the bumper solid LED daytime running lights in the form of an asymmetric 'C' makes the new Mégane a face in the crowd."

The three-dimensionally held lighting strips of the rear lights shine in LED technology, thus ensuring in addition to recognition - by day and by night: daytime running lights and taillights remain after starting the engine automatically switched on. When the lights and the lights band Norev has done a good job and transfer the shapes of the model skilfully on the model; something Norev but anyway ruled out of the proverbial FF.

The interior made to measure

The shaping of the massive dashboard have transferred the French from Vaulx-en-Vaulin also very good in the 1:43 scale, hit the contours exactly. Even with the decorative elements no compromises were made. Only one feature Norev had to fit: The Mégane GT is the first model ever in the compact segment with a co-steering rear axle that is to increase driving safety and improve steering precision.

It should be, according to Renault excellent maneuverability in the City and thrilling agility on winding country roads arise; difficult to implement the model. Enthusiastic but are likely to be the price of the fans of the model according to current models, the Norev for the model calls: 19.95 euros for an advertising model in this quality - Hammer! When did the last time, where?

Advertising models of Porsche, for example, are from works start at about 44,00 Euro, Mercedes-Benz has raised the prices for zinc die-cast model cars in 1:43 scale to more than 37,00 Euro, partially to over 40,00 Euro. Because the price offensive from France expected to almost revolutionary, but it fits so the Grande Nation. The collectors will be pleased with this initiative and, therefore, may be equal to ensure the new Twingo III, the Norev has also implemented in the scale of 1:43.

Also in this for the price of 19.95 euros custom work in processing and mold design, perfect the look of the proportions of the rear-drive prototype of the model-transmitting. Headlights, whose interior, taillights, Finish - anywhere there are smears against expensive miniatures; up on missing exterior mirror films. What the paragraph of the beautiful model cars should cause little damage. We say: Have fun with it!