On Sunday the 24th of may 2015 the 6th round of this year&#039;s Formula 1 World Championship starts in Monte Carlo. ck-modelcars is on site. 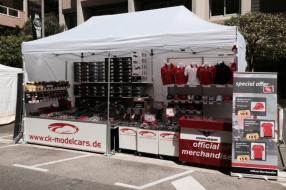 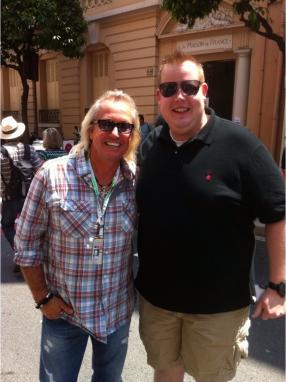 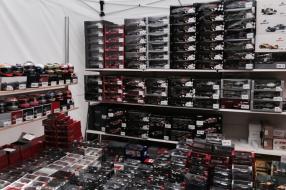 Although Nico Rosberg won in the Mercedes F1 W06, the last race in Barcelona. His team-mate Lewis Hamilton is the favorite for the victory in the Monaco Grand Prix that starts on Pentecost Sunday. Hamilton convinced on Thursday at the 1st free practice and defended his fastest time in the second session, in which he with 1: 17.192 minutes ahead of Rosberg drove again and the two Ferrari with Sebastian Vettel and Kimi Raikkonen to the top. Vettel had little more than a second behind Hamilton.
Right up there with the Grand Prix of Monaco is also a team of CK-model cars; not with its own Formula 1 racer, but after all, the only model car dealers on Rue Grimaldi. The Rue Grimaldi is the main artery for the flow of visitors, which it draws from the city center at the 3.340 kilometers long race track: a real pole position for ck-modelcars. the dealer in Monaco are offering formula 1 models Until Sunday after the race.

The only booth with model cars on the Rue Grimaldi

Owner Christoph Krombach to: ". We stand out in Monaco, since we are the only one there, where model cars are sold. The rest - nearly 100 booths - offers exclusively only textile." For the influx of visitors, the team of CK-model cars is certainly well prepared, as shown in the attached pictures on this blog post: In addition to the rich selection of model cars from Formula 1 racing car ck-modelcars also offers items from the Marussia Fan Merchandise.

The location on the Rue Grimaldi brought the model car professionals from Asslar also lots of prominent visitors. Once again Christoph Krombach: "We already had at our booth Alain Prost, Lucas di Grassi, the footballer Elia from HSV and Werder Bremen and Robert Geiss." Robert Geiss is textile entrepreneur and is nationally know from the docu-soap from RTL2 "The Geissens - A terribly glamorous family" . he is here pictured left with Christoph Krombach.

The atmosphere at the F1 race in Monaco

However, Prince Albert of Monaco passes by the booth  of CK-modelcars, if he is traveling to his box. Christoph Krombach stressed that the atmosphere at the Grand Prix of Monaco is a very special because of the sound of the engines in the skyscrapers and the Principality add a special charm. The inaugural on April 14, 1929 race at the Circuit de Monaco drove though Monte Carlo and La Condamine.
First winner was William Grover-Williams on Bugatti.the race was a Part of the Formula 1 World Championship for the first time in 1950. It takes place on a regular basis Since 1955. The  average speed there drivin is around 150 kilometers per hour because the narrow streets does not allow a  faster pace. The race distance is therefore limited from the usual 305 kilometers to 260.520

New models in the shop

Not limited but it is the current offers of model cars the Formula 1, which has  many new arrivals from the producers Minichamps and Spark these days. So such as the Arrows FA1 Ricardo Patrese 1:43 from Spark in golden Warsteiner look of Sweden Grand Prix in 1978, a which the car came 2nd with the start number 35. A position  that on Pentecost Sunday that would leave Lewis Hamilton dissatisfied.